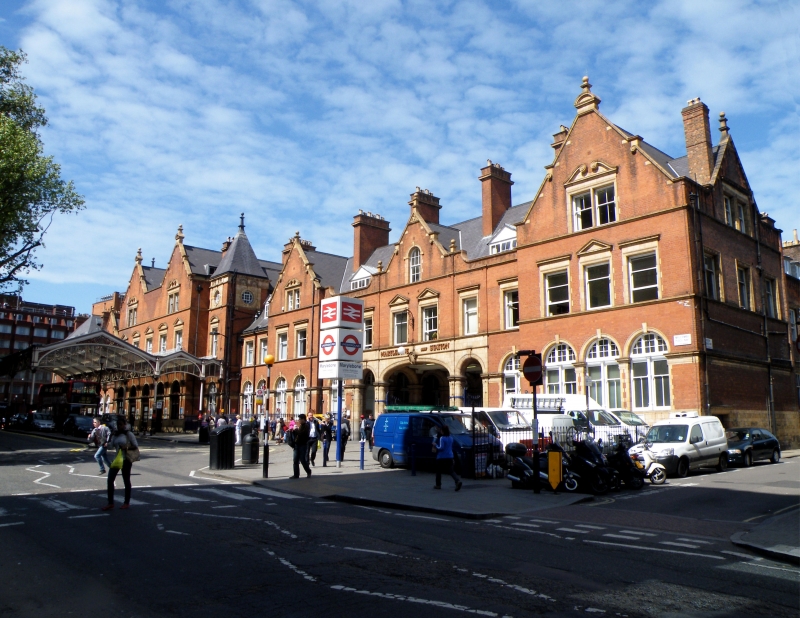 Railway terminus. 1899. H. W .Braddock for Fox Engineers. Flemish Renaissance style. Red brick with buff terracotta dressing, slate roof. For the most part two-storeyed but with a raised central section above the arcaded passenger entrance. Asymetrical composition; canted block at west end with three bay block behind in Harewood Avenue return. Melcombe Place front characterised by dormers, gables, pyramidal turrets on square towers either side of central block. Round-arched windows on ground floor, straight-headed elsewhere, all with original joinery. Main tripartite entrance at east end faced with terracotta. Linked to hotel opposite by iron and glass porte-cochere. Boston Place: long wall flanking platform articulated into bays by vertical buttresses and recessed brick course.
Interior: red brick, terracotta, glazed white brickwork above cornice level. Booking office, of panelled oak, with booth openings. At the west end of the concourse, the Victoria and Albert pub with two bars: dark wood panelling, original curved bars and bar shelving, broad ornate plasterwork frieze, fireplace. Beyond the concourse, three train sheds: one spans 40 ft, the other two span 50ft. They are connected by a roof of five spans running transversely across the concourse. Columns and girders are all of steel. Long wall flanking platform articulated with round-headed niches.
Historical Note: Marylebone station, opened in 1899, was the last of the London termini to be built. It was constructed for the Great Central Railway by Sir Douglas and Francis Fox, engineers. The station is linked to the former Grand Central Hotel by an iron and glass covered way.