A Grade I Listed Building in Leek, Staffordshire 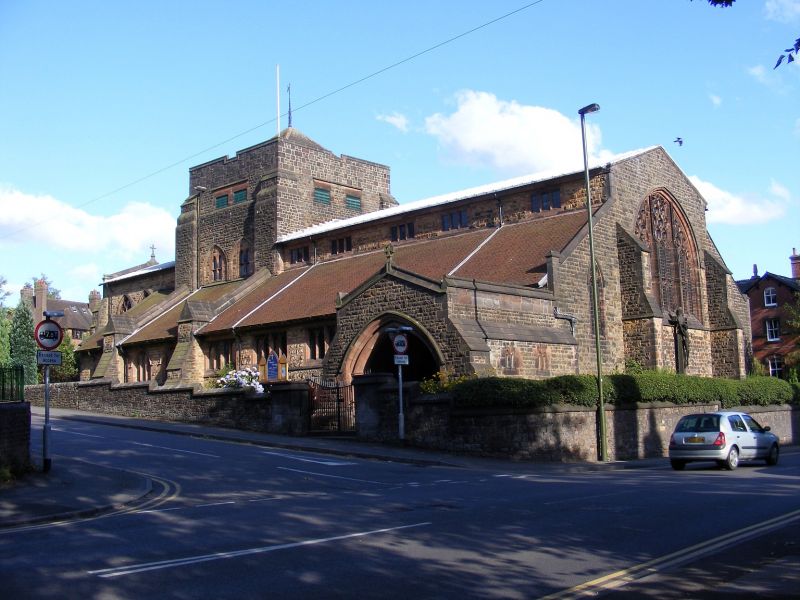 LEEK,
SOUTHBANK STREET (south side),
Parish Church of All Saints

INTERIOR: a wide and well-lit span, in accordance with
Tractarian principals. Nave arcade of four bays, the multiple
chamfered arches carried on short octagonal piers. Western bay
somewhat narrower than the rest. Arcade continues as a single
bay in the crossing.
Wide W window with clear glass, and three-arched recesses beneath,
painted to designs attributed to William Morris with foliage
and flowers, with an angel in the central arch. Shallow
crown-post roof structure. Wide crossing arch sprung from
between the arches of nave arcade and crossing. Flying
buttresses of tower straddle the aisles (which continue the
whole length of the nave) at the same point. Chancel arch at E
of crossing narrower than W crossing arch, since it is carried
from semi-octagonal responds. Steps lead down from E end of N
aisle to vestry beneath chancel.
FITTINGS: panelled wood screen with one painted panel
separates aisle from organ chamber to its east. Low stone
screen to chancel with central cast-iron gates. Walls of
chancel entirely painted by Gerald Horsley; emblematic high
dado incorporating castles, crowns and pomegranates, on which
are superimposed in text, the Virtues; figurative painting of
the Heavenly City and the Tree of Life above. Emblematic
painting to ceiling, with two panels representing the
Annunciation and Christ in Majesty. Triptych designed by
Lethaby, originally painted by F Hamilton Jackson,
subsequently poorly repainted. Reredos of stained wood
panelling, with vine scroll canopy frieze. Painted chancel
chair in Pre-Raphaelite style.
Lady chapel to E of S aisle: stained wood dado panelling with
incised frieze, the walls and ceiling above entirely painted.
E wall by Horsley, the Annunciation; the rest by Edgar Platt
(executed and signed by Thomas Shaw, 1915) and depicting St
Francis with the birds, Adam and Eve expelled from the garden
of Eden, and Noah's Ark.
Font directly facing the altar (in accordance with Tractarian
principals), and against the W wall: dated 1886, to designs of
Lethaby; green marble, a heavy, austere octagonal basin with
lettering in low-relief in a band towards the top, and symbols
of the evangelists at the cardinal points at the base. Pulpit
also designed by Lethaby; stone base with wood octagonal body,
in which projecting ribs at angles are intricately carved with
foliate openwork. Scalloped moulding to recessed panels with
filigree openwork. Canopy hood over.
STAINED GLASS: an overall plan submitted by Morris and Co. in
1893 was never implemented in full, but the company was
responsible for much of the stained glass in the church,
contributed over several years. N aisle: mostly by Morris and
Co to designs of Burne-Jones executed during the 1930s.
Easternmost window by John Platt, also employing a
Pre-Raphaelite style. E window, Morris and Co., the Tree of
Jesse, 1923. Wood panelled war memorial in N aisle, with
central panel painted by C Davidson. Lady chapel E window,
Morris and Co, 1887; SE window by Gerald Horsley, 1891. SW
windows by John Platt of Leek, painted by Harold Rhodes of
York, 1920. S aisle window, Morris and Co, 1947-8. The church
also contains an important collection of work by the Leek
School of Embroiderers.

This List entry has been amended to add the source for War Memorials Register. This source was not used in the compilation of this List entry but is added here as a guide for further reading, 19 January 2017.