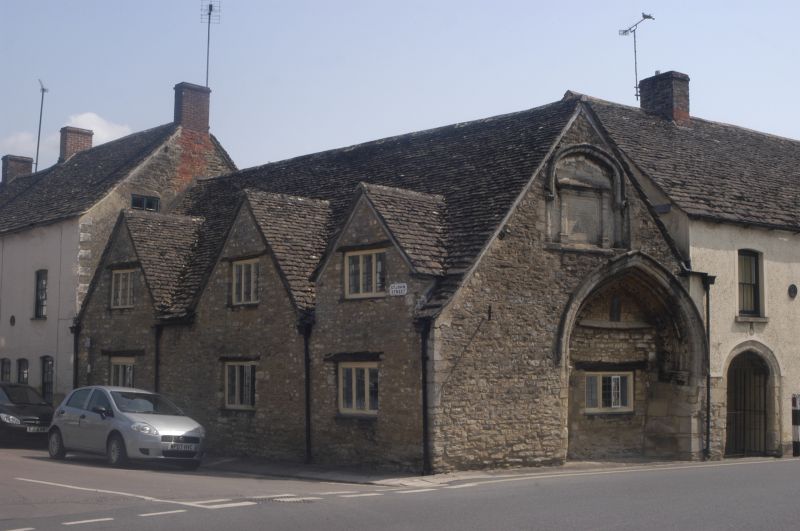 MATERIALS: constructed from limestone rubble with stone dressings, and a stone slate roof.

PLAN: situated on the eastern side of St John’s Street, the building is orientated roughly north to south. It is rectangular on plan, consisting of three units, numbers 1 to 3: south to north. The building is a single storey with an attic, and each unit is two-rooms deep.

EXTERIOR: the west elevation of the building faces onto St John’s Street. It is three bays, each of which has a full-width dormer gable with a three-light mullioned, leaded casement window to each storey, with a timber lintel and slate sills. The south elevation is the gable end of short terrace; it has a re-set late Norman arch with splayed sides and two orders springing from shaped corbels. The outer order has a roll moulding, and the inner has hexagons with lozenges. The archway is blocked, and contains a replacement three-light window, and a raised drip mould and lancet above. In the gable above is a reset late-C12 stilted arch on columns, containing a square panel with pilasters and a cornice, inscribed to record the 1694 endowment by Michael Weekes.

In the adjacent building, 3 St John’s Bridge (Grade II, List entry 1269275), is a rebuilt archway to a passageway providing access to the rear courtyard of the building. Within the passage is a doorway to the southernmost house, number 1.

On the east elevation, the ground floor of the southernmost bay is obscured by the adjacent building, and a dormer to the attic abuts its gable. Numbers 2 and 3 face onto the rear courtyard. On the ground floor each has a replacement door and a two-light leaded casement window. There is a continuous timber lintel at impost level, and a full-width dormer gable to the northernmost unit, number 3, and a hipped dormer within the roof of number 2.

INTERIOR: not inspected, but understood to retain chamfered beams and open fireplaces with oak lintels.

St John’s Court, a group of three almshouses, stands on the site of the medieval hospital of St John of Jerusalem. The date of the foundation of the hospital is unknown, but records attest to its existence by the C13. It is reported to have incorporated an existing chapel, the former late-Norman doorway to which remains within the southern wall of the building. The hospital was closed as part of the Dissolution of the Monasteries, and the site is recorded as having been confiscated. It was acquired by clothier John Stumpe, who transferred ownership to the Corporation in 1580, with the liability on them for the maintenance of a school and almshouses at £20 a year.

The almshouses are said to have been founded in 1597, and the present building is of C17 construction, incorporating earlier fabric. A plaque records that in 1694 Michael Weekes, a former resident of Malmesbury, gave an annual endowment of £10 to support of the school and almshouses.

The building was restored and modernised in the 1960s. The almshouses have lost two tall chimneystacks, on the south gable and on the party wall between the northernmost two units.

St John’s Court is listed at Grade II* for the following principal reasons:

* as a pre-1700 structure which retains a significant proportion of its historic fabric, and which reflects the Cotswold vernacular building traditions of the area, using local materials;

* the building incorporates a richly moulded C12 doorway, reused from the chapel, and later the hospital of St John, which preceded the almshouses;

* the exterior of the building and the general plan form are little altered, hence the almshouses remain a good illustration of the accommodation provided for the poor of the period.

* as an example of C17 secular almshouses, continuing the provision of social welfare facilities in the town, being sited on the site of the former poor hospital;

* incorporating a reused medieval plaque, inscribed in 1694 to record a charitable endowment by a former resident of the town.

* with the Grade I listed courthouse to the north, and with the numerous other neighbouring listed buildings.