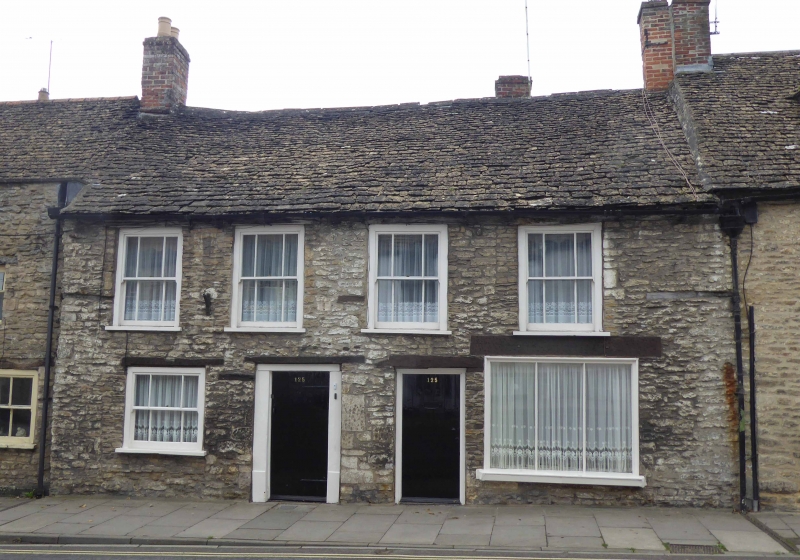 Formerly known as: Nos.125-131 HIGH STREET.
House, extended, divided into 4, now one. Early C17, extended
mid C17, refronted, roof raised; extended to rear late C18.
Limestone rubble with brick lateral and gable stacks and stone
slate roof.
PLAN: L-plan, a 2-room parallel range with a through-passage,
mid C17 right-hand rear wing and C18 left-hand rear service
wing.
EXTERIOR: 2 storeys and attic; 4-window range. Timber lintels
to openings, 2 central doorways with boarded doors, the
left-hand one with a wide C18 frame and 3-plank door to the
through-passage, a right-hand former shop window with 3
plate-glass panes, left-hand ground-floor window with brick
infill to side and below, with wide plate-glass sashes with
margin bars in exposed boxes. Sections of former wall plate
flank first-floor windows.
The through-passage is flagged with timber square framing with
brick noggingg, and doorways each side to the front.
Rear 2-window range has an inserted stack toward the rear; a
blocked doorway to the left of the current doorway at the rear
end of the passage, a C17 3-light pegged timber mullion
windows with iron casements, and the gable has a ground-floor
10/10-pane sash. Brick C18 wing has a well.
INTERIOR: details of the front range include a timber-framed
through-passage, the right-hand room has a bressumer to a
rubble hearth with parts of a former winder stair to the left,
now a doorway, with wide chamfers to beams and wall plate,
first-floor with a 3-bay roof with early C17 truss blades with
trenched purlins to extended C18 tie beams.
The rear wing has thick walls, splayed window reveals with
seats, and chamfered, stopped beams; the roof largely rebuilt
C19, has a C17 truss behind the stack that backs onto the
front range, possibly from a smoke bay.