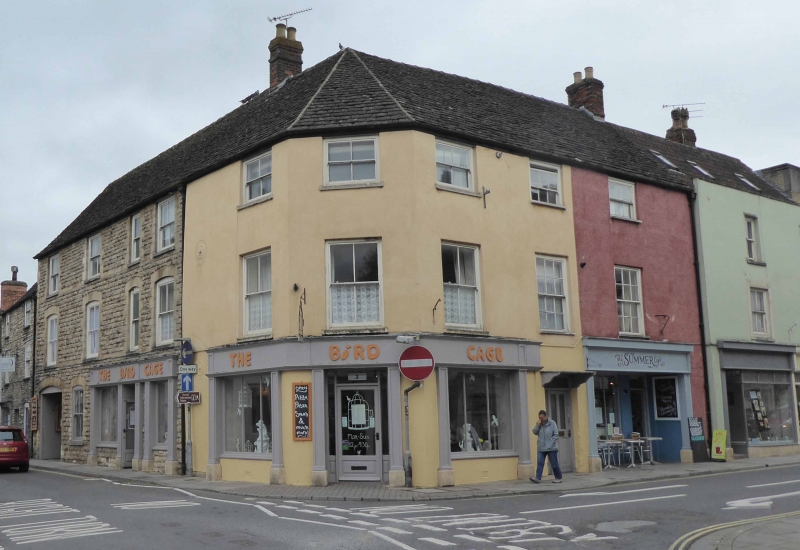 (Formerly listed as:
HIGH STREET
2 AND 4)

Houses, now shop and café with flats above. The buildings are in two ranges, dating from the late C18 and mid-C19, with alterations in the C20.

MATERIALS: The C18 range is of rendered limestone rubble, the C19 building is of coursed limestone and limestone dressings to the main elevation, and brick to the rear. The continuous roof is covered in stone slates, and the stacks are of brick.

PLAN: The High Street range is double-depth on plan, with a further range running at right-angles to the rear of 4 High Street. The Oxford Street range is single depth on plan, with a further single storey range running rearwards for a short distance from the easternmost bay. A small courtyard is formed at the rear of these ranges.

EXTERIOR: The late-C18 range is of two storeys and attic, and consists of a three-window range facing the High Street, a canted, one-window corner bay, and a wide single-window range to Oxford Street. This building is rendered and has two-over-two horned sashes, with six-over six sashes to the southern two bays. It is adjoined by a range dating from the mid-C19, which fronts Oxford Street: also of two storeys and attic, this is an irregular, four-window range with similar two-over-two horned sashes in segmental headed openings, built from squared and coursed rubble stone with limestone dressings. The ground floors have late C20 shop fronts, with the exception of the eastern bay of the C19 range, which has a pair of double doors set under a segmental arch. The ground floor of 4 High Street contains a single commercial unit. The ground floor of 2 High Street and most of the Oxford Street range is occupied by another commercial unit, taking in the ground floors of both buildings apart from the ground floor of the eastern bay of the Oxford Street range, which is occupied by a single lock-up unit. The first and second floors across both ranges are occupied by flats, which run through the two buildings. There is a continuous roof over both ranges, hipped above the canted corner, and covered in stone slates.

REASONS FOR DESIGNATION DECISION:
2 and 4 High Street, incorporating the former 1 Oxford Street and present 1a Oxford Street, are designated at Grade II, for the following principal reasons:
* The buildings form an interconnecting range of buildings of the late C18 and mid-C19 with C20 shops to their ground floors
* They survive well, and are of good quality, forming a significant corner group at the main crossroads in the town
* Group value with the medieval Market Cross and the adjacent designated buildings, as well as the numerous other designated examples to either side of both the High Street and Oxford Street