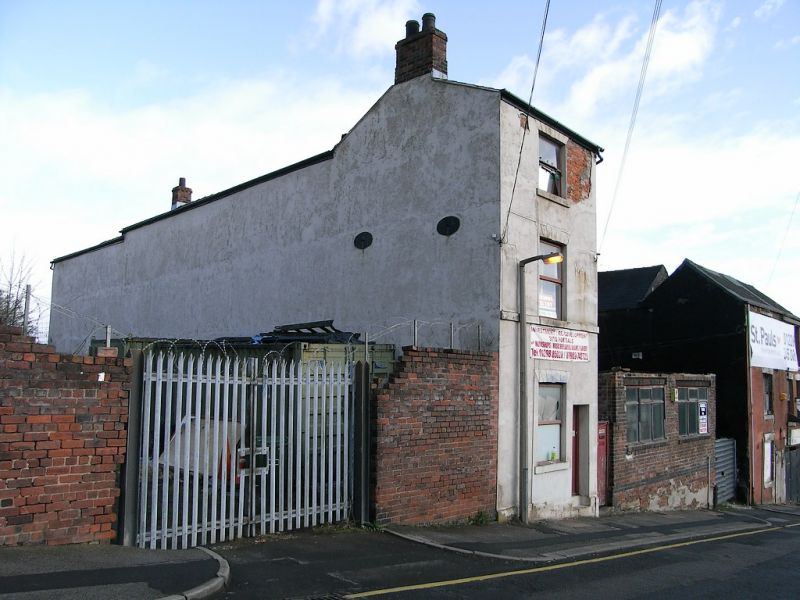 3 houses, now workshops, and adjoining workshops. c1840 and
c1860, with late C19 and mid and late C20 alterations. Brick
with slate roofs. Front block, formerly houses, now partly
demolished. Workshops to rear on either side of yard.
EXTERIOR: front range has to left a 3 storey block, single
window. Colourwashed brick, rendered right gable. Plinth,
first floor band and gable stack, and a single reglazed plain
sash on each floor, the second floor window smaller, all with
multi-keystone lintels. Ground floor has to right a C20 door.
To right, a mid C19 block, 2 windows, reduced to single
storey. Brick with corrugated asbestos roof. 2 large 3-light
wooden casements and to left, a passage doorway.
Block to left of yard, mid C19, 3 builds. 3 storeys; 10 window
range. 2 rear wall stacks. First floor has, to left, a blank,
then four 16 pane sashes. To right, 3 glazing bar casements,
then two C20 windows. Above, four 16 pane sashes, then 3 C20
windows. To right, three 2-light glazing bar casements, then 2
C20 windows. Ground floor has to left, a blocked basket arched
cart opening with C20 door inserted, flanked to left by a
small blocked opening, then a plain sash and a 4-panel door,
both with multi-keystone lintels. To right, a stable door,
then a metal framed glazing bar casement, and a 4-panel door
to stairway. To right again, a stable door, then a 3-light
casement, then a blocked basket arched carriage opening.
Block to right of yard, mid C19 and C20, 2 storeys; 9 window
range. 2 gable and 2 ridge stacks. First floor has to left
three 3-light casements, and to right, six 2-light casements.
Ground floor has to left a door flanked to left by a blocked
door and to right by a small window, then a door to the
stairway. The rest of the front is covered by a C20 brick
addition. Right return has two 2-light casements and below, 2
C20 doors. Rear has seven 2-light casements and to right three
3-light metal framed casements. Below, a blocked opening and 5
windows, all boarded up.
INTERIOR not inspected.
This building is an example of the small scale cutlery
workshops characteristic of the Sheffield cutlery industry.
Some cutlery processes are still carried out here.