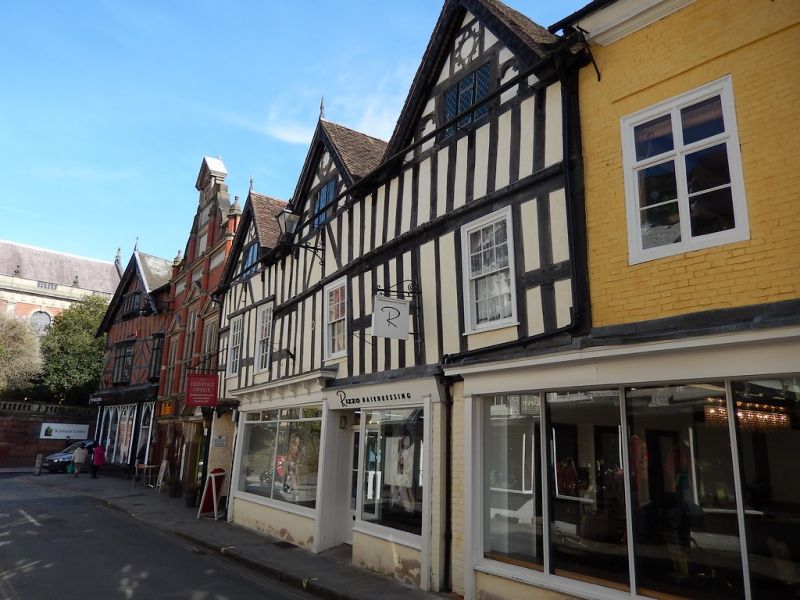 Formerly known as: No.2 and Post Office Inn MILK STREET.
House, now shop. Rear wing mid/late C15, rest early/mid C16
with attics raised early C17. Timber-framed with plain tiled
roof.
2 storeys with attics, 4-window range. Inserted shop fronts to
ground floor, and archway through to rear court to left. Upper
storey framed in close studding with middle rail. Raised attic
above has close studding. Sash windows in moulded cases
unequally spaced. 3 wide gables above, each with latticed
3-light casement windows. Decorative timber work forms
arcading each side of these windows. Rear wing has, on ground
floor and partly obscured, the door arch and a window arch
surviving from the original shop front with a jetty and close
studded framing above.
INTERIOR: rear wing roof is a single bay with closed tie-beam
trusses either end where 3 queen struts rise to the collar.
Single tier of purlins with curved windbraces. In the front
range when the attics were raised the end trusses including
the slightly cambered tie beams were re-used at a higher
level. In the intermediate frames principals, collars and
V-struts were raised with new interrupted tie beams added.
(Mercian Heritage Series No.3: Morriss, RK: 2-3 Milk Street,
Shrewsbury: 1994-).