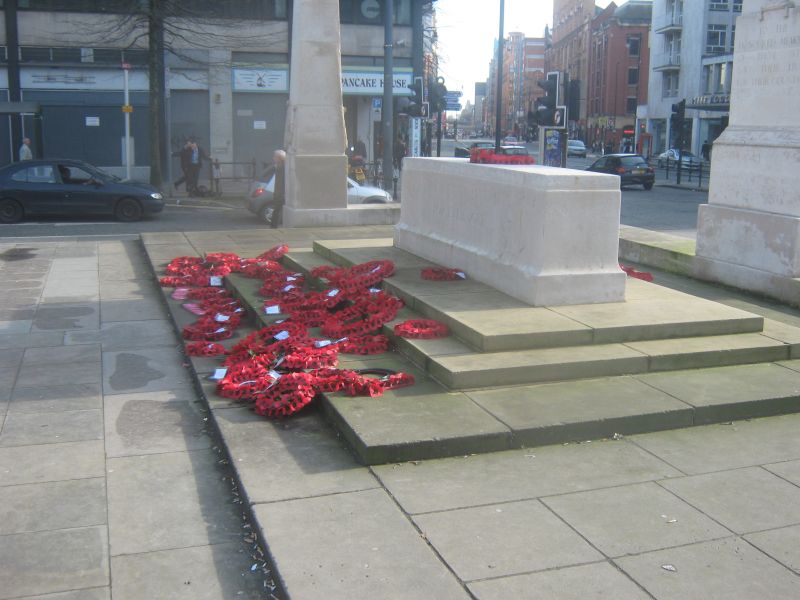 The memorial, of Portland stone, comprises a cenotaph, two flanking obelisks, and a war Stone all on a slightly raised, coved, platform. The cenotaph, like that in Whitehall, London, is a pylon in diminishing stages supporting a catafalque on which lies the figure of an Unknown Soldier partly covered in a greatcoat. Beneath, to either side, is a wreath containing the city’s coat of arms; to the front and rear are a sword pendant and Imperial crown. The north-west side of the cenotaph bears the inscription: TO THE/ HONOURED MEMORY/ OF THOSE WHO/ GAVE THEIR LIVES/ FOR THEIR COUNTRY. On the south-east side is inscribed: O LORD GOD OF OUR/ FATHERS KEEP THIS/ FOREVER IN THE/ IMAGINATION OF THE/ THOUGHTS OF THE/ HEART OF THY PEOPLE.

Two obelisks, shorter than the cenotaph, stand to either side. These have swaged garlands to the front. Centrally between them, behind the cenotaph, is a War Stone.

Only when prompted by the British Legion in 1922 was a War Memorial Committee formed in Manchester. After much debate about where a memorial was to be located, and the choice almost by default of St Peter’s Square, Lutyens was appointed (but again, only after local wrangling) as architect. The project then proceeded smoothly, with concerns about the incongruously close proximity of Temple Moore’s memorial cross to the demolished St Peter’s church being set aside.

The memorial, constructed by Nine Elms Stone Masonry Works of London, cost £6,940. It was unveiled on 12 July 1924 by the Earl of Derby with Mrs Dingle, a local resident who had lost three sons in the war. In 1949 the dates of the Second World War were added to the obelisks and the surrounding area was dedicated as a garden of remembrance. In 2014 the cenotaph was relocated (and turned through 90 degrees) to a new memorial garden aligned with the southern entrance to the Grade I-listed Town Hall.

Manchester War Memorial is listed at Grade II* for the following principle reasons:
* Historic interest: as an eloquent witness to the tragic impacts of world events on this community, and the sacrifices it made in the conflicts of the C20;
* Architect: by the nationally renowned architect Sir Edwin Landseer Lutyens (1869-1944), who designed extant 58 memorials at home and abroad including the Cenotaph in Whitehall;
* Design: among the more ambitious of Lutyens’ eight cenotaph memorials, here incorporating obelisks and a War Stone;
* Group value: with a number of listed assets, notably the Grade-I listed Town Hall.