A Grade II* Listed Building in Clifton, City of Bristol 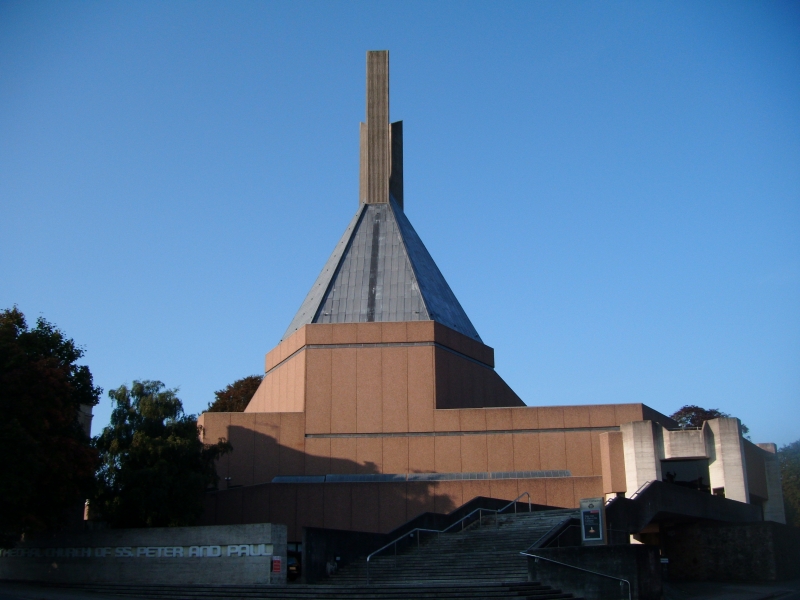 Roman Catholic Cathedral. 1969-73 to the designs of Ronald Weeks, E S Jennett and Antoni Poremba of the Percy Thomas Partnership. Pre-cast concrete panels and in-situ concrete. Lead-clad pitched roofs stepped between tiled flat roofs. Irregular, elongated hexagon in plan, with west door set in one of the longer flanks, and the altar and sanctuaryset on axis with this - almost, but not quite in the centre of the building. The building set over a car parking area in the sub-basement. Polygonal, board-marked concrete piers flank the St Peter and Paul's doors' to Clifton Park and Pembroke Road, and mark the corner between these doors. Raised walkway with board-mrked concrete balustrade to each entrance. Irregular composition of offset, superimposed, part-hexagons rise in three layers to culminate in the smallest hexagon, above the sanctuary; this has pairs of windows to three sides at the base, of irregular hexagonal form, with lead surrounds. From this smallest hexagon a tall, lead roof rises, of irregular pyramidal form. This has inset panels of glazing to the liturgical west, and from its apex rises a spire comprising three linked ribbed conrete uprights, one taller than the others and of triangular section with a bevelled top. The west door has a heavy projecting board-marked concrete canopy. Dramatic interior with board-marked concrete to walls, deep upstand beams of roof and to galleries. Pyramidal timber acoustic cones' set in lower ceilings. Complex natural top-lighting, above and behind sanctuary and to the Chapel of the Blessed Sacrament, the latter separated by screen, designed by Brother Patrick of Prinknash Abbey. Walls of narthex inset with stained glass by Henry Haig. Narthex gives on to baptistry area; font of Portland stone by Simon Verity. The Stations of the Cross are low relief panels of light-weight cast concrete, each one worked in 1« hours by William Mitchell. His original doors replaced with clear glass in c.1995, but the lectern made by him to Weeks's design remain.

A new cathedral in Clifton was commissioned in 1965 to supercede the Pro-Cathedral (already listed) of the 1830s. The Percy Thomas Partnership produced a powerful and dramatic building, which is perhaps the most important work of one of Britain's largest post-war architectural practices. Clifton is often described as being the first cathedral in the world to accord completely with the liturgical guidelines issued by the Vatican in November 1963 (Building, 15 June 1973, p.73). Its planning is more succinct and successful than that at Liverpool Metropolitan Cathedral because it places the altar to one side, with a horseshoe of seating for the congregation. This quickly became a preferred alternative to the notion of seating entirely in the round' because of the clearer view it gave everybody of the celebration. Built in a remarkably short space of time to a low budget (?600,000), Clifton Cathedral achieves a rare integration of materials and spatial quality which is remarkable for a cathedral of any period. George Perkin in Concrete Quarterly (January 1974, p. 23), described it as having a remarkable serenity and delight' coupled with an apparent simplicity'. Mary Haddock, in Building (20/27 December 1974, p.43) admired the hint of theatre in the design; the absence of clutter and garish church ornament; the fine materials and the use of colour; the cold design in stained glass - ... a heart-lifting Christian temple, inspiring reverence but not awe. A sermon in concrete.' The Cathedral won the Concrete Society Award for 1974.