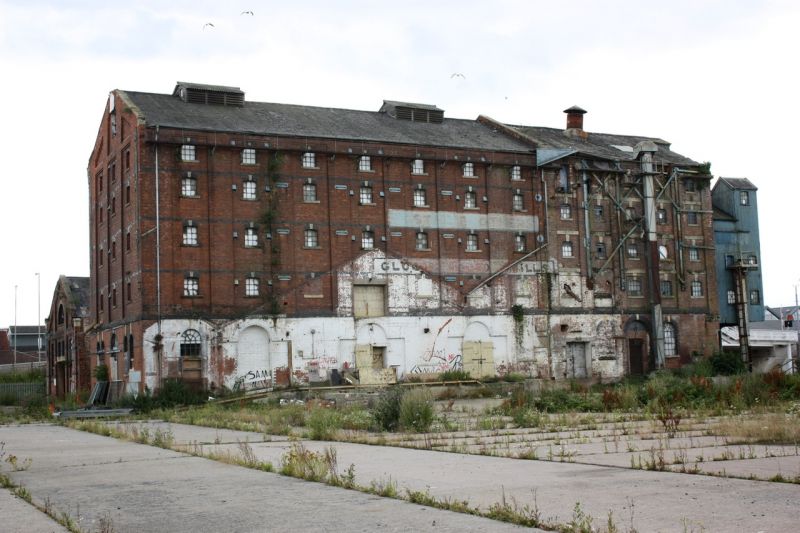 Also known as: Foster Brothers Oil and Cake Mill MERCHANT'S
ROAD.
Provender mill. Original block 1862. By George Hunt of Evesham
for Foster Brothers, extensive enlargement and additions
1890-5; extensive C20 additions and alterations. Red brick,
with bands of blue engineering bricks, gabled slate roof with
two gabled roof vents on ridge of main block, large C20
additions faced in corrugated iron.
PLAN: a core block with gable-end wall of five bays towards
Baker's Quay and sides of five bays. The west gable-end wall
partly obscured by an added hoist housing supported on four
cast-iron columns above the Quay, replacing an earlier,
timber-framed, full-width, gabled structure above the Quay,
taken down when the revetment wall collapsed in 1892; the
block extended to the east by about seven further bays and a
two parallel, end-gabled, lower ranges added on the south
side, and a further short, parallel range for work shops added
at the east end of the south side,
EXTERIOR: original block and its eastern extension of five
storeys and loft, two parallel ranges on south side of two
storeys and lofts, work shop range of two storeys. Much of the
detail of the original block obscured by later additions and
alterations; generally the elevations of the original block
have a tall ground floor storey capped by a stone band, on the
upper floors the bays defined by brick strip and quoin
pilasters; in each upper floor in each bay a window with brick
cambered-arched head set with a key stone below an ashlar
course at each-floor level; the east gable-end walls to the
extension to the original block and the parallel ranges to
south each of three bays, and all with similar brick details
with strip and quoin pilasters defining each bay; generally
the windows to each floor with cambered-arched heads, in the
gable of the southern range in the wide central bay a large,
inserted C20 delivery doorway, above in the gable a
semicircular lunette window with brick arch set with a
keystone.

The workshop range adjoining on the south side is painted
white, and has flat, composition roof; single-bay wide and the
south side of four bays of varying width, the front facing
Merchants' Road on the ground floor has a wide doorway with
flat head on flush brackets and on the first floor a
semicircular-arched recess framing a smaller
semicircular-arched fixed light with metal glazing bars, in
the side wall similar windows on both floors with
segmental-arched heads and fixed lights with metal glazing
bars.
INTERIOR: not inspected.
(Conway-Jones H: Gloucester Docks An Illustrated History:
Gloucester: 1984-: 69).