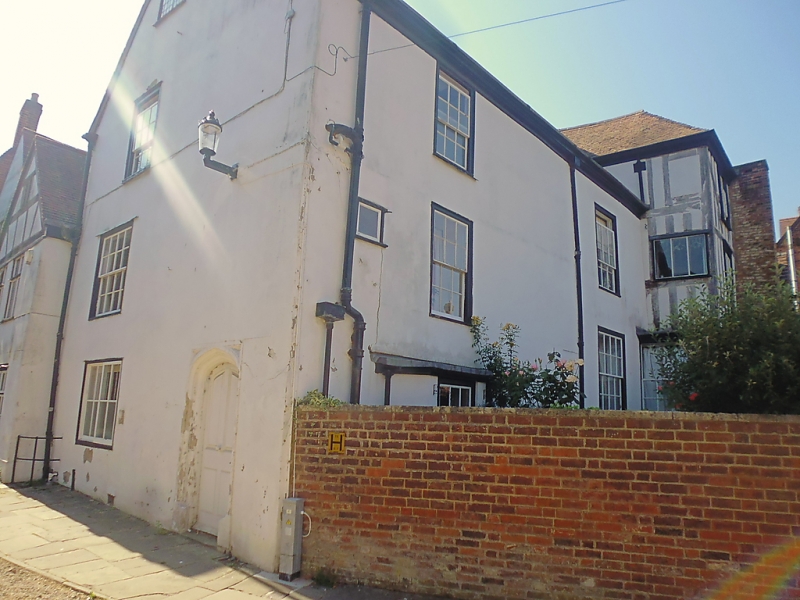 House. 1616; with late medieval origins substantially
remodelled in C18 and in early C19, minor C20 alterations.
Until late C19 Nos 4A & 4B Miller's Green were the
Schoolmaster's and Usher's houses but then united as one house
until sub-divided again as two houses in 1986. The southern
half incorporates medieval stone structure, including the
remains of a culvert below the ground floor, seen during
excavation but now not visible. Rendered brick and stone,
gabled plain tile roof, brick stacks. Double-depth block with
parallel ranges.
EXTERIOR: three and two storeys, cellar and attics; entrance
doorway on the south side; irregular fenestration, on both
upper floors late C18 sashes with glazing bars (4x3 panes).
INTERIOR: to right of entrance hall early C19 staircase with
open string, column newels, stick balusters and ramped hand
rail; in principal rooms good C18 architraves and doors; on
ground floor in room to left a chamfered bridging beam, C18
architraves and doors, and a late C18 stone chimney-piece with
the key-block in the lintel carved in relief with vase and a
patera in relief at each end of the frieze; on the first floor
a room with an arched bed recess flanked by cupboards with
arched heads to the doors; in bathroom exposed chamfered
beams; in the gable-end of one of the attics a late C17 leaded
casement with a glass pane inscribed "Sarah Payne 1753" with
"1759" and "1761" in column below, the pane set upside down in
the leading.
This is the northern part of a late C14 or C15 monastic
building of which the southern half was remodelled as No.4B
Miller's Green (qv).
(Eward S: No Fine but a Glass of Wine, Cathedral Life at
Gloucester: Salisbury: 1985-: 325).