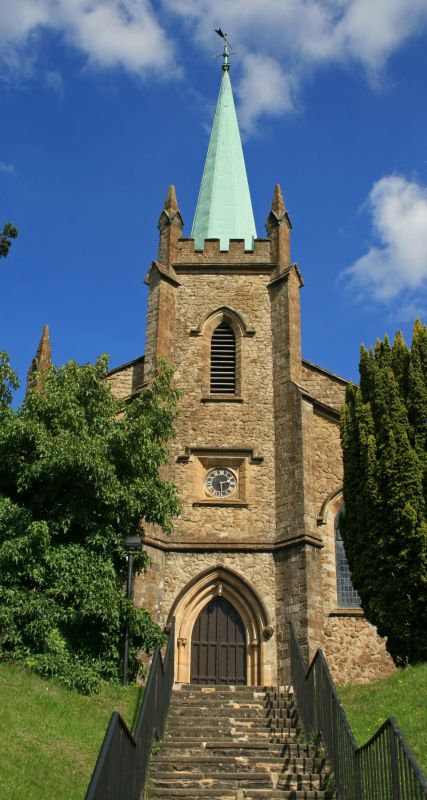 INTERIOR: Very wide nave with a shallow plaster rib vault. Internal triple W arch to W end gallery, decorated with shafts with leafy capitals and continuous hoodmould. Blind traceried gallery frontal, the central section projecting on miniature vaults. Internally the architecture of the Blomfield E end is High Victorian although the decoration is surprisingly late in date. Full-height traceried openings to N and S sides of the chancel which has an encaustic tiled floor. The E end triple lancet is decorated with carved spandrels and marble shafts which extend down to divide the cusped stone panels of the reredos. Panels enriched with scenes in mosaic. The central panel is 1894 by Salviati, the rest of the sanctuary decoration is 1910-1917 by Powell's. Late C19 timber drum pulpit with blind traceried panels and a pierced parapet. Font with a circular bowl with large-scale stiff-leaf carving and blind ogee arches on a stem with corner shafts. C19 square-headed nave benches with recessed panels and choir stalls with poppyhead finials. East window, 1905, by Kempe.

HISTORY: St Mary's, prominently sited high above a square at the junction of busy roads with a long flight of steps up to the west tower, was built in 1831 to the designs of Decimus Burton with the chancel and chapels added in 1882 to the designs of Sir Arthur Blomfield.
The church originally served as a Chapel-of-Ease to St Nicholas Church, Sevenoaks but by 1864 Riverhead was made an ecclesiastical parish in its own right.
SUMMARY OF IMPORTANCE: St Mary's warrants listing in Grade II for its special architectural interest as an 1831 church by Decimus Burton in the Late Georgian 'lancet' style, executed in characteristic local materials. The later phase by Blomfield shows how Victorian church design developed, while the early C20 fixtures in the chancel are of good quality too.