A Grade I Listed Building in Otford, Kent 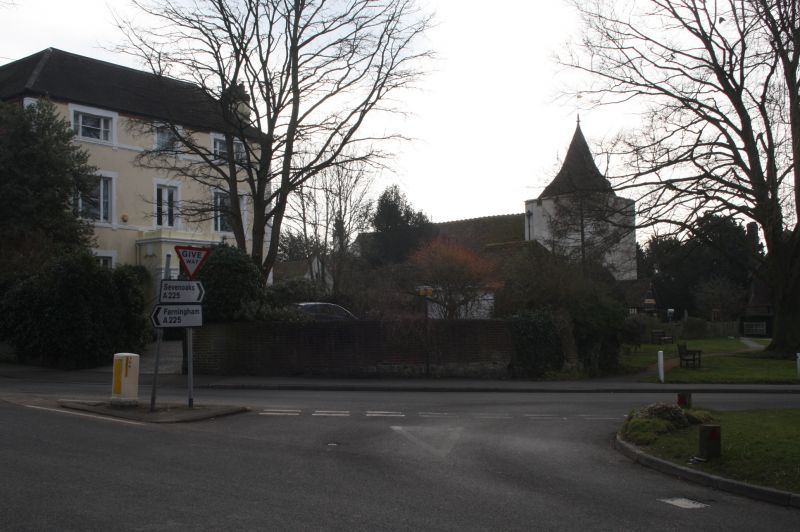 MATERIALS
Flint and stone rubble. Some brick in the tower, which is rendered. Timber W porch. Tiled roofs and shingled spire.

EXTERIOR
A small, low church with a massive, squat W tower. The tower, which is rendered, is unbuttressed and undivided externally, and has an embattled parapet and a low broach spire. There are tiny, narrow lights in the lower part of the tower. The W porch is dated 1637 and has a pair of panelled outer doors. The porch walls have close set, heavy framing with an open colonnade of chunky, turned baluster shafts above, and there is an openwork pendant in the gable. The N and W walls of the nave are C11, possibly pre-Conquest, and retain early quoins; the buttresses are of 1863. The two N windows are C14, and are of two lights in two different patterns. The chancel is also C14, and has an excellent, and very large, E window of five lights, renewed c.1854, with Decorated tracery and a blocked N window similar to one in the nave. C16 NE vestry at right angles to the chancel with Tudor arched widows and an inserted N door. The S aisle and S chapel have C16 windows with cusped lights under depressed heads with hood moulds, and there is a C16 S door in the aisle, also with a depressed head and hood mould.

INTERIOR
The three-bay S arcade, which replaces a timber arcade, of 1863 by G E Street, in a C13 style with round piers with moulded capitals and arches of two, chamfered orders. Street also rebuilt the arch to the S chapel and replaced the chancel arch, which is wide and has continuous chamfers. The entrance to the W tower is of door, rather than arch, proportions, and is closed by a door. Probably of the late C12, it is pointed and has two orders towards the nave. The NE vestry has an internal recess that has been identified as a wafer oven for baking communion wafers. The chancel is dominated by the very large monument to Charles Polhill, d.1755, and it also has an excellent C16 Easter Sepulchre tomb in the N wall.

PRINCIPAL FIXTURES
The monuments are particularly notable. Excellent early C16 Easter Sepulchre-style tomb in the chancel N wall, with a damaged panelled tomb chest and above it a recess with panelled vaulting and a canopy with a brattished cornice. Also in the chancel a group of monuments to members of the Polhill family, including David Polhill, d.1754, by Cheere, a fine bust on a scrolly pedestal with an obelisk behind. Charles Polhill, d. 1755, very large monument, also by Cheere, with a full length standing figure in a toga leaning on an urn and below him, two reading female figures. Also Charles Polhill, d. 1805, by J Bacon, Jnr, a hanging monument with a portrait profile and a willow tree over an urn. Good collection of hatchments.

HISTORY
There was Bronze and Iron age settlement in Otford, and Roman remains have also been found. The Archbishops of Canterbury held Otford from as early as the late C9, and the archiepiscopal palace there was rebuilt by Archbishop Warnham in the early C16 in magnificent style, but it is unclear if this was in any way related to the rebuilding of the S aisle and chapel of the church at much the same time. Otford church was a chapel of nearby Shoreham, and the earliest fabric in the church is the C11 N wall. The tower was probably added in the late C12. The chancel was rebuilt in the C14 and the nave provided with new windows. The S aisle and S chapel are early C16, and were referred to as 'the newe ile' in a will of 1532. The Easter Sepulchre tomb in the chancel may be connected to the rebuilding work. The church is said to have been damaged by fire in the mid C17, and the timber arcade replaced by Street was apparently installed after the fire, presumably replacing a medieval arcade. The tower is unusually short, and photographs of it with some of the render removed show that the SW corner, at least, is brick, and it is possible that this is a C17 repair. The low door to the tower may also be a C17 reworking using older materials. There was some refurnishing and repair c.1845, when the E window was renewed; the nave seating is probably also of this date. The church was extensively restored in 1863 to designs by G E Street (1824-81), who was a leader of the Gothic Revival, including the replacement of the nave and chancel arcades and of the chancel arch. There were further repairs in the C20.