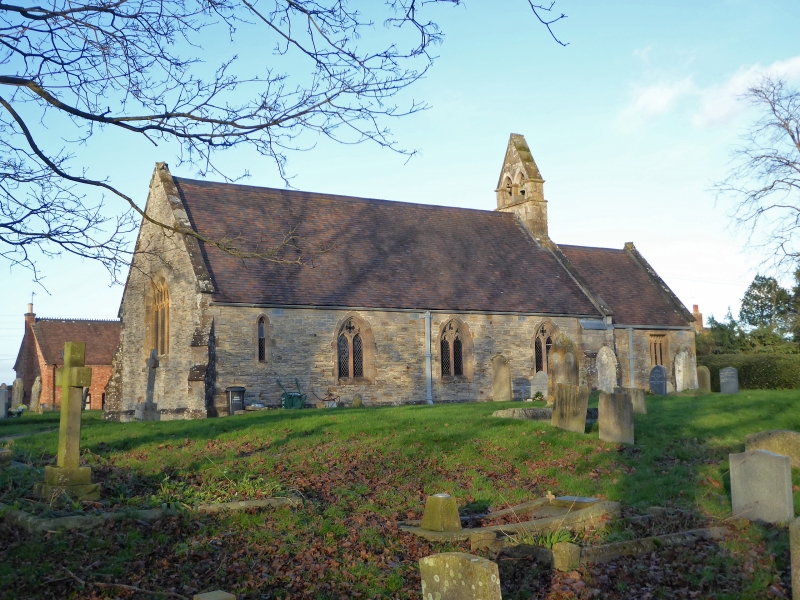 PLAN: Nave with lower and narrower chancel and north porch.

EXTERIOR: The nave has three 2-light geometrical windows and a single-light window at the west end. The west wall has diagonal buttresses and a re-set 3-light Perpendicular window. On the north side are one 2-light and a single-light window, corresponding with windows on the south side, and a smaller 2-light window at the east end. The porch, timber-framed on a dwarf wall, has glazed panels. The north nave doorway has a continuous chamfer. Big freestone buttresses are at the east end of the nave, to support the bellcote. This is gabled, with 2 bells in pointed openings. In the chancel is a 3-light Decorated east window. In the south wall is a 2-light window with geometrical tracery, a straight-headed 3-light Tudor-Gothic window, and a blocked pointed doorway. The north side has a 2-light Tudor-Gothic window.

INTERIOR: The nave has a trussed-rafter roof of 1889. The narrow C12 chancel arch is on plain imposts, and is flanked by post-Reformation squints. The chancel has a keeled wagon roof, boarded behind thin moulded ribs. Walls are stripped of plaster. The nave has a parquet floor; the chancel has a floor of mainly medieval encaustic tiles, arranged there in 1889.

PRINCIPAL FIXTURES: The Norman font was renewed in 1986. The old font bowl, with arrow-head and chevron friezes, is in the sanctuary (and similar to the font at Abberton). Its replacement bowl rests on the original round base. In the chancel is a pillar piscina on a round column, and next to it a C13 shelf that retains part of it stiff-leaf corbel but has otherwise been rebuilt. The polygonal pulpit is on a stone base. It has Gothic panels framing mandorlas with IHS monogram, Alpha and Omega, and cross. The west window contains fragments of medieval glass. The C19 crucifixion in the east window is by Lavers, Barraud & Westlake. Glass in the porch is by Francis Stephens (1960) and Hardman (1975). In a glass cupboard in the north wall are fragments of carved masonry found during the 1889 restoration. The nave has modern chairs, the chancel has one C19 bench with moulded end.

HISTORY: Pre-Christian burials are said to have been found during restoration in 1888. The church is C12 origin, but had later fenestration and doorways before its restoration by W.J. Hopkins, architect of Worcester, in 1888-89 at a cost of £700. The contractor was Stanley of Birmingham. A drawing, now inside the church, made during the restoration shows the nave to have been taken down, but the chancel and bellcote remained standing. Chancel windows may replicate earlier windows.

REASONS FOR DESIGNATION:
The church of St Anne, Wyre Piddle, is listed Grade II* for the following principal reasons:
* For its surviving C12 work, including chancel arch, font and pillar piscina.
* It has other medieval features of special interest, including corbelled shelf, C15 tiles and stained-glass fragments.