A Grade I Listed Building in Eastchurch, Kent 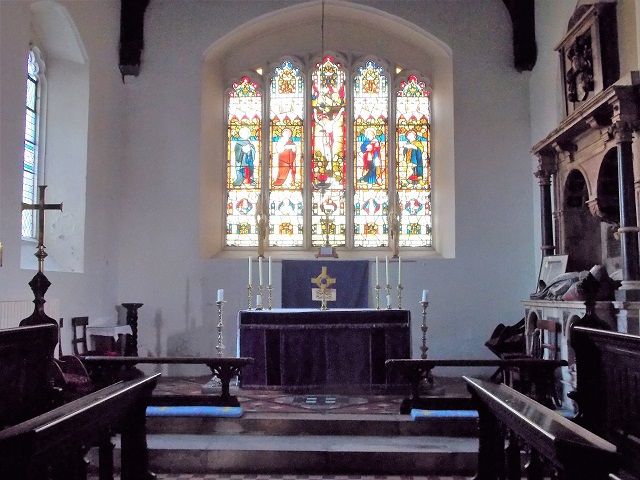 EASTCHURCH
HIGH STREET (north side)
Church of All Saints

GV
I
Church. Rebuilt 1431-32 after the previous church fell into ruin. Pevsner suggests that the two-light Decorated windows at the west end are reused. Chancel roof repaired after fire damage of 1922. Said to have been designed by William Nudds, a Cistercian monk of Boxley and built by lay brothers from Boxley Abbey. One major Perpendicular building campaign.

The chancel roof is similar, with three bays: the post 1922 repair is difficult to identify from the ground. Aisle roofs are similar but plainer, the braces on plain stone corbels. Double-chamfered tower arch on moulded corbels. Tower was intended to be stone vaulted and preserves the corbels and first courses of vaults in the corners. Eleven-bay chancel screen, the full width of nave and aisles with wide bays flanking the central entrance. The screen has lost its rood loft and has been extensively repaired. No reredos. North and south hagioscopes (squints) to chancel. South east chapel lined with unusually lavish Jacobean two-tier panelling: similar panelling in the tower. The panelling originated from the former Cathedral of St Martin at Ypres.

Monuments include, on the south side of the chancel a fine alabaster chest tomb with effigies commemorating Sir Gabriel Livesay, d.1622 and his second wife, Anne. An African's head is incorporated into the design. Marble monument on the north wall of the chancel to Vice Admiral Sir Richard King who captained HMS Achilles at the Battle of Trafalgar.

SUMMARY OF IMPORTANCE: the church is an outstanding example of a Perpendicular church, built largely in one phase in 1431-32. It has six medieval roofs, the nave and chancel of unusual design for Kent. Fittings of interest include a rood screen and monuments.