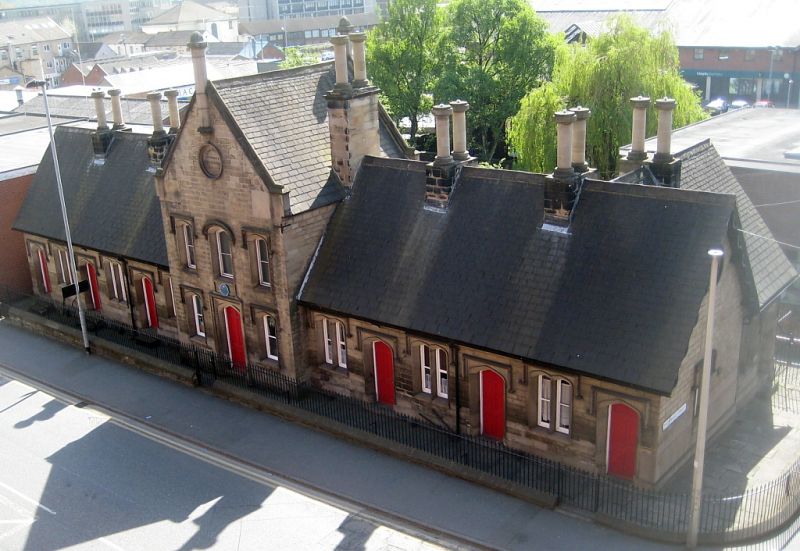 Symmetrical terrace of almshouses in coursed worked stone with steeply pitched, graduated green slate roofs and tall cylindrical pots on the multiple chimney stacks.
PLAN: a 2-storey central section with single storey side wings and a short gabled wing at the right hand end to the rear.
ELEVATIONS: the front elevation has a central gable with an entrance, a window to each side and three windows above. To each side are three doors and three pairs of windows, alternating. The windows are single pane sashes with segmental pointed arches, and doors and windows have heavy drip moulds. The window over the central entrance has a curved drip mould, and above is a plaque reading ALMS HOUSES/ FOUNDED BY/ CALEB CROWTHER MD/ AD 1838. The gable has heavy kneelers and a corbelled finial. Doors, some of which are false (not in use), are panelled with large hinges and the central one has an architrave. There is a low stone wall in front with replacement railings.
Rear elevation has been partially remodelled to give four rather than eight entrances. The windows to the central section match those to the front; all other openings have been altered and ramps constructed to two entrances. The footprint is unaltered. There are plaques with quatrefoil decoration to the central gable and those at each end of the side wings, and the bargeboards are decoratively pierced.
Internally there are four dwelling units each with a living room, bedroom, bathroom and kitchen. The upper floor, accessed by a wooden staircase directly behind the central entrance, is a single room with a grey marble fireplace and cornices. A steel beam has been inserted across the rear wall to prevent collapse. No original features remain in the dwelling units apart from the front windows and doors.
HISTORY:The almshouses were endowed by Dr Caleb Crowther in 1838. Dr Crowther was a general practitioner and consultant to the pauper lunatic asylum, and the almshouses were originally intended to house 12 nonconformist almsmen in six units. Dr Crowther is buried at the rear of the row. In c1990 the units were adapted into single accommodation for four individuals, with alterations to the internal layout and to the entrances and windows at the rear. The upstairs room was the Trustees meeting room until c.1990 but is now unused.
SOURCES: Helen Caffrey, Almshouses of the West Riding of Yorkshire (2006), p101

REASONS FOR DESIGNATION
The almshouses are designated at Grade II for the following principal reasons:
* They retain their original footprint unaltered
* Their external appearance is entirely unaltered to the main elevation
* They have a number of original features such as windows, doors, chimneys, decorative plaques and bargeboards, contributing to their special interest
* Their original function and layout is clearly readable in the present exterior.