A Grade I Listed Building in Barkisland, Calderdale 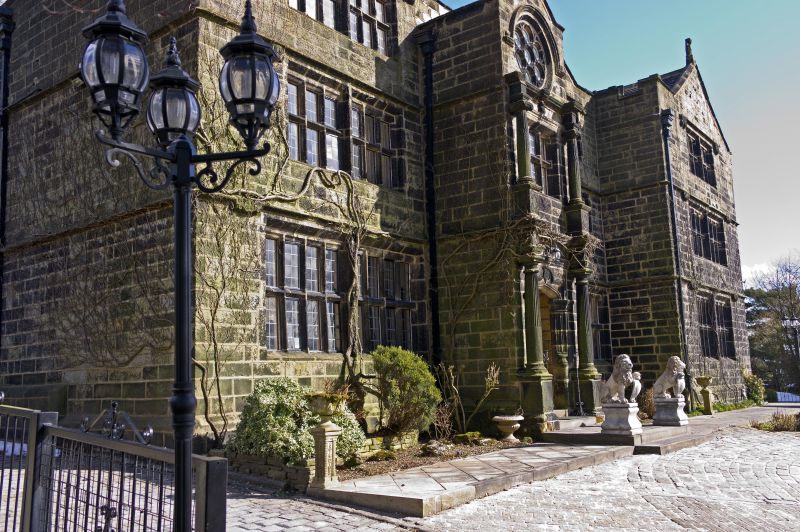 House, 1638 for John Gledhill. Finely dressed stone, stone slate roof. Large
magnificent house, double-pile with a fully developed F-plan throwing its porch
into prominence. Unlike all other contemporary houses in the area it is of 3
storeys. Plinth, string course over ground and 1st floor windows, hoodmoulds
with label stops to 2nd floor. 3-gabled facade linked by parapet with finely
carved detail to this front. All windows are double chamfered mullioned and
transomed with king mullions. and cyma-moulded mullions and transoms and
elaborate label stops. 16-light window with 12-light windows over to 1st and
2nd floors. Projecting porch has elaborate doorway with Tudor arched lintel
inscribed "1638 IG SG" with a carved face to the centre, moulded impost and
moulded jambs with broach stop. The inner doorway of the porch is an arch, with
moulded imposts and rusticated voussoirs. This is flanked by 2 orders of fluted
columns, Doric supporting Ionic, the pedestals carved with an elaborate
lozenge. Entablature with moulded string. 6-light window under which is carved
bird and heraldic coat of arms. The top floor has a wheel window with tracery
made up of 6 circles surrounding a central circle. Pedimented gable and
parapet. Hall range has 24-light window with 18-light window over to 1st floor
and 16-light to 2nd floor. Wing breaks forward; 16-light window with same over
and 12-light window over to 2nd floor. Coped gables with bases for finials,
carved figure to wing. The rear has double chamfered mullioned and transomed
windows with plainer chamfered mullions. The 2 tiers of cross-windows at an
intermediate level between storeys probably indicate. the site of the,original
stair (which has been moved); the string course steps over these windows and is
broken by the insertion of a taking-in door with monolithic jambs. Right hand
return wall, of cross-wing, has similar windows all preserving their mullions
and leaded paned glazing, and a stone inscribed "Nunc mea mox huius sed postea
nescio cuius". The east wing has a large stack with a cluster of 8 diamond-set
flues, "that to the west wing has 6 diamond set flues. Modern stack to central
range.

Interior: Largely remodelled but lavishly panelled in C19 in imitation of the
original period. The only early features are 3 C17 fireplaces, all have Tudor
arched lintels. That to hall has richly moulded surround. That to the south
parlour of the west wing is inscribed "1605 IG" and is probably reused. The
east wing has a fireplace with finely carved jambs with foliated balusters with
scrolled capitals surmounted by carved faces. This is very similar to that in
the hall of Norland Lower Old Hall, Sowerby Bridge (q.v.) dated 1634 and is
likely to have been executed by the same mason.