A Grade I Listed Building in Huddersfield, Kirklees 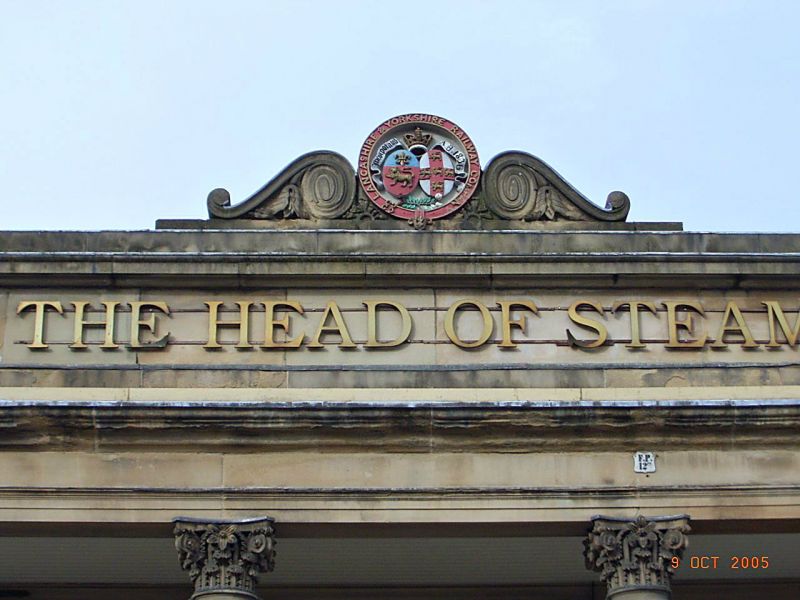 Terminal blocks of five bays each, breaking forward one bay in front of colonnade, astylar but continuing the entablature of colonnade. Central three bays have free-standing portico, one bay deep, with no pediment but a solid panelled parapet in front and balustrades at sides. Elaborate scrolled consoles flank balustrades and two are placed above parapet flanking armorial badges inscribed "Huddersfield and Manchester Railway and Canal Company", at north end, and "Lancashire and Yorkshire Railway Company," at south end. South block is continued south by four more bays of wall with same entablature: first bay has double doors with moulded surround, next three have plain blind panels.

Detached block north of north terminal block 11 bays, first three have plain blind panels and full entablature, next five break back and have attic storey, last three also have attic and break back still further, and ground floor of these last eight is masked by a rock-faced stone lean-to.

Platforms are covered by one very wide and one other worught iron trusses with elaborate bosses at intersection of bracing members. Original supports have been replaced or reinforced, except for two on platform 4 which are columns with elaborately moulded bases and colectic capitals. Buffet and Waiting Room between platforms 4 and 8 is a separate match-boarded structure with panelled pilasters, each taking paired brackets and cornice. Steps down to underpass between platforms 4 and 8 have wooden handrails and cast iron balustrade with turned newels, both around stair well and dorm centre of steps. Massive stone paving slabs in underpass, and patent wooden non-slip steps down.

History: The grandeur of the station is the result of its being built at the joint expense of the Huddersfield and Manchester Railway and Canal Company (absorbed by the LNWR in July 1847) and the Manchester and Leeds Railway. The former built the line, and planned to extend it to Leeds via Dewsbury. The latter, having failed to win this concession, needed running rights to connect their main line at Cooper Bridge with their subsidiary from Springwood Junction to Sheffield.

The foundation stone was laid by Josh Fitzwilliam, the Lord Lieutenant, on 9 October 1846, when a public holiday was declared and church bells were rung from dawn till dusk. It was partly opened for the commencement of services in August 1847, but not completed until October 1850. It had only one platform until October 1886, when the roof over the tracks, which had been begun in 1878, but had collapsed in course of construction in August 1885 (killing 4 men), was finally completed. The central part housed elaborate refreshment rooms which functioned until at least 1883.