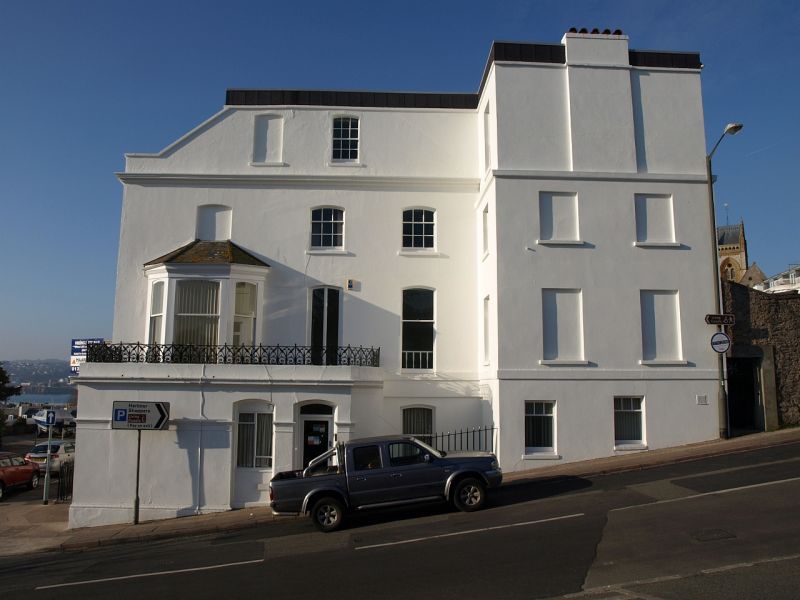 Terrace of 9 houses. 1811 to the designs of Jacob Harvey. The
earliest part of Sir Lawrence Palk's development of Torquay.
Some later alterations. Houses in use as offices. Plastered;
slate roofs; stacks with rendered shafts. Classical style.
PLAN: Slightly bowed terrace, set high above the harbour,
facing south. Centre and end houses broken forward. Each house
double-depth on plan. Those to left of centre have entrances
to the right, those to right of centre have entrances to the
left. Several houses have rear stair projections; services in
basement; principal rooms on first floor. End houses entered
on the returns.
EXTERIOR: 3 storeys and basement. Deep projecting cornice with
plain parapet above. Some unfortunate attic additions. Each
house has a 3-bay front except for the 5-bay No.50. Continuous
cast-iron balcony with interlace balustrade divided by
vertical panels of roundels. Round-headed doorway with moulded
architrave. Gibbs surrounds with vermiculated rustication and
keyblocks with carved or cast heads; panelled reveals.
Original doors 6-panel, mostly with plain fanlights (No.46 has
a pretty lead fanlight with a central roundel, similar to
those on Beacon Terrace, also designed by Harvey).
Segmental-headed windows: ground floor originally 12-pane but
reglazed as 2-pane sashes. 12-pane first-floor windows, 3 over
6 on the second floor. No.42 has a very large doorway on the
3-bay west end with rusticated vermiculated architrave,
incised moulding to soffit and reveals of doorcase and Greek
key moulding below fanlight. 2-leaf door of 6 panels, upper
panels with roundels and lozenges; windows mostly original.
No.58 has a flat-roofed porch block on the return, c1860, with
a projecting cornice and parapet crowned with good cast-iron
parapet. Segmental-headed doorway to right. c1860s first-floor
canted bay on return leads on to flat roof of porch block.
No.50 (in the centre) and No.58 have square-headed doorways on
the front with moulded architraves with keyblocks
INTERIOR: Partially inspected. Some houses retain good
plasterwork cornices with deep relief, including Nos 42, 48,
50. Some retain the ground floor internal partitions with an
archway between the 2 rooms. Other features of interest likely
to survive but not seen on survey.
SUBSIDIARY FEATURES: Good cast-iron railings with spear
finials to basements.
HISTORY: An elegant terrace and historically important in the
development of Torquay. Early prints, some reproduced in
Ellis, show the higher terrace.
(Ellis CA: An Historical Survey of Torquay, 2nd edition:
1930-: P.339, 340, 341; Buildings of England: Cherry B: Devon:
London: 1952-1989: P.857).