The Shakespeare Memorial Fountain (also referred to as The American Fountain) 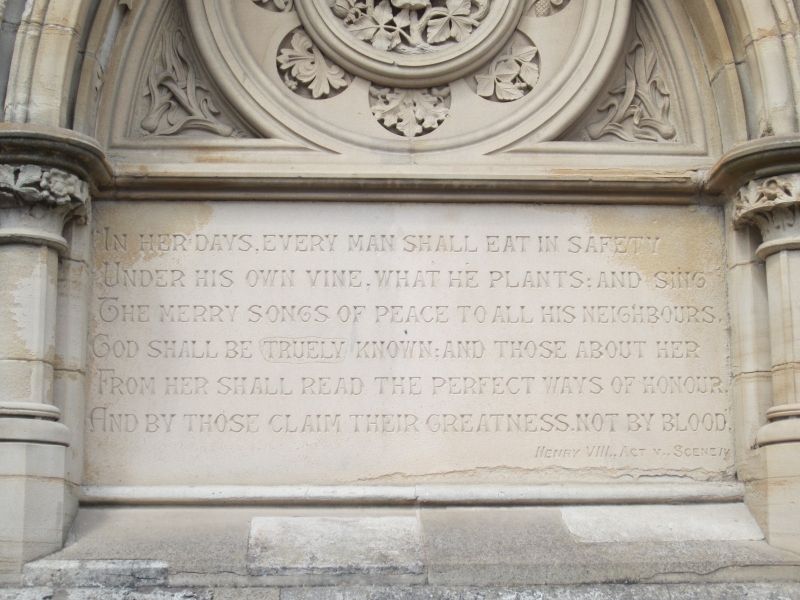 Entry Name: The Shakespeare Memorial Fountain (also referred to as The American Fountain)

A commemorative clock tower incorporating horse troughs and a drinking fountain of 1886-7 by Jethro Cossins of Birmingham, gifted to Stratford-upon-Avon by the American publisher George William Childs, in dedication to William Shakespeare and in celebration of Queen Victoria's Jubilee.

A commemorative clock tower incorporating horse troughs and a drinking fountain of 1886-7 by Jethro Cossins of Birmingham, gifted to Stratford-upon-Avon by the American publisher George William Childs, in dedication to William Shakespeare and in celebration of Queen Victoria's Jubilee.

MATERIALS: the tower is built in Yorkshire stone from Bolton Wood, with its base and drinking troughs in Peterhead granite.

PLAN: the tower has a square plan with projecting buttresses placed diagonally at the four corners.

EXTERIOR: the 3-stage tower, approximately 18m in height, has a tall conical spire with gargoyles taking the form of different animals, and smaller cylindrical turrets with conical spirelets to each corner, topped with decorative, wrought-iron vanes, as to the central spire.

The lower stage has gabled diagonal buttresses capped with statues of the British Lion and the American Eagle holding shields with the Royal arms and the Stars and Stripes. The arched recess to each face has shafts and a relief carved tympanum over an inscription (see below). The south side has a trefoil-headed entrance with strap hinges to a plank door and flanking trefoil-headed recesses, formerly containing a barometer and thermometer. To the east and west is a trough for horses and cattle with smaller troughs for dogs and sheep below, and to the north is a drinking fountain. Each of the faces in the lower section has richly carved roundels depicting different flowers, fruits and vegetables.

The middle stage has a triple arcade with moulded pointed trefoiled arches on slender shafts to each face and cylindrical turrets terminating in conical spirelets in two stages to each corner.

The base of the memorial bears the following inscriptions:

South side, serif, centralised: 'THE GIFT OF AN AMERICAN CITIZEN / GEORGE W. CHILDS. OF PHILADELPHIA / TO THE TOWN OF SHAKESPEARE, / IN THE JUBILEE YEAR OF QUEEN VICTORIA'

East side, serif, centralised: ' "IN HER DAYS, EVERY MAN SHALL EAT IN SAFETY / UNDER HIS OWN VINE, WHAT HE PLANTS; AND SING / THE MERRY SONGS OF PEACE TO ALL HIS NEIGHBOURS. / GOD SHALL BE TRULY KNOWN; AND THOSE ABOUT HER / FROM HER SHALL READ THE PERFECT WAYS OF HONOUR, / AND BY THOSE CLAIM THEM GREATNESS, NOT BY BLOOD" / HENRY VIII, ACT., SCENE IV'

West side, serif, centralised: "TEN THOUSAND HONOURS AND BLESSINGS / ON THE BARD / WHO HAS GUILDED THE DULL REALITIES OF LIFE / WITH INNOCENT ILLUSIONS" / WASHINGTON IRVING'S "STRATFORD-ON-AVON" '

Please note that the (seasonal) hanging flower baskets are not fixed to the fountain and as such are not listed. However, the hooks they are hanging on, which are attached to the building, are listed.

In 1878 the Dean of Westminster visited the US and was the guest of Mr George William Childs, a well known printer, bookseller, publisher and newspaper proprietor, who had recently donated a window to Westminster Abbey commemorating the poets George Herbert and William Gowper. During the meeting Childs expressed the wish to donate a window dedicated to Shakespeare 'as evidence of goodwill between the two nations having the fame and works of Shakespeare as a common heritage'. Over the following years the plans were discussed and eventually it was decided that the memorial should be in the form of a drinking fountain which 'would be a useful gift both to man and beast'. It was to be given to the Corporation of Stratford-upon-Avon and placed on the market square on Rother Street. It was agreed that Stratford-upon-Avon would arrange the supply of water and of light at night. In 1886-7, to designs by the artist Jethro Anstice Cossins of Birmingham (see below), a staged clock tower was built, incorporating at the base, a horse and cattle trough, a lower trough for dogs and sheep, and a drinking fountain. The tower was dedicated to William Shakespeare but as its inauguration on 17 October 1887 coincided with Queen Victoria's Jubilee that too was commemorated. The 'imposing ceremony' was performed by the actor Henry Irving who read out a specially commissioned poem by Dr Oliver Wendell Holmes, and he delivered a speech praising Mr Childs' generosity and recalling Shakespeare's contribution to English-speaking culture. A telegram from Queen Victoria was also read out stating that the Queen 'is pleased to hear of the handsome gift from Mr Child to Stratford-upon-Avon'. The ceremony was attended by a large number of distinguished guests including the Mayor of Stratford-upon-Avon, the Earl de la Warr, the American Minister Dr Phelps, the author Bram Stoker, and the Mayors of Leamington, of Warwick, of Coventry and of Lichfield. The official party marched in procession to the fountain, where a large marquee had been erected. Afterwards, the official party went for lunch in the Town Hall, where toasts were given to Queen Victoria , Shakespeare, Mr Childs and Mr Irving. A detailed story of the 'Memorial Fountain to Shakespeare', edited by L Clarke Davis, including transcripts of newspaper articles, was published in 1890. The memorial has since also been referred to as The American Fountain, or The Shakespeare Memorial Fountain.

Jethro Anstice Cossins (1830-1917) was an English architect, who practiced mainly in Birmingham during the C19. In 1890 he formed partnership with Barry Peacock. In 1900 Ernest Bewlay joined to form Cossins, Peacock and Bewlay architectural partnerships. Many of their buildings are listed, including for example Balsall Heath Library (listed at Grade II*).

The Shakespeare Memorial Fountain (also referred to as the American Fountain), Rother Street, Stratford-upon-Avon, is listed at Grade II* for the following principal reasons:

Architectural and artistic interest: as a particularly important example of a Victorian public monument by Jethro Cossins of Birmingham, in an individual and expressive Gothic style, displaying particularly high quality detailing and stone carvings;

Historic interest: as a particularly important and early example of a monument celebrating the life and work of William Shakespeare, erected in Stratford-upon-Avon, Shakespeare's place of birth, in 1867-8, and sponsored by the American philanthropist and publisher George William Childs;

Group value: being situated in a particularly prominent position in Stratford-upon-Avon it has very strong group value with a number of listed buildings in the vicinity, particularly along Rother Street.