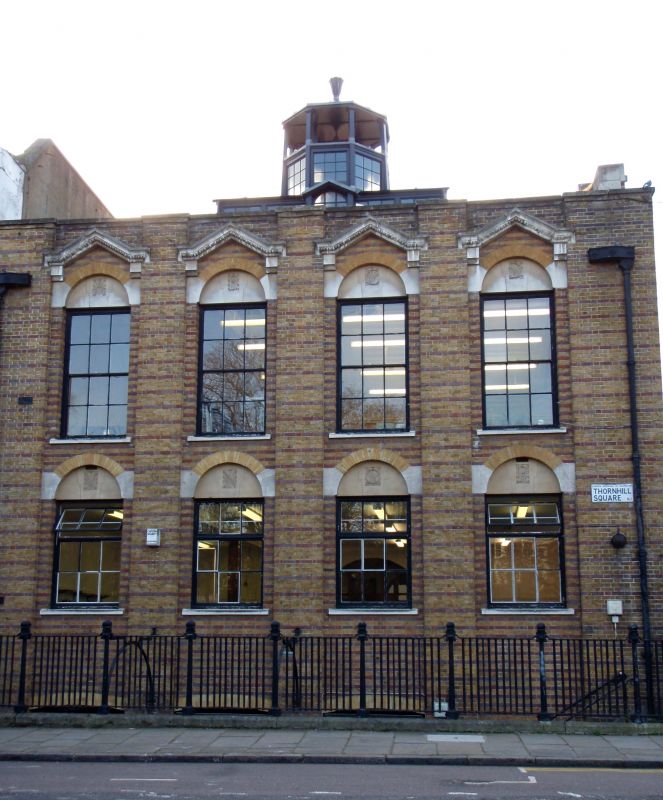 Branch public library. Dated 1906 on the foundation stone and
on a plaque over the first-floor windows of the corner range
block in Bridgeman Road; completed 1908. By Arthur Beresford
Pite for the Public Libraries Committee of Islington Borough
Council; builders C.Dearing and Sons. Yellow brick set in
Flemish bond with bands of purple brick, dressings of yellow
gauged brick and Portland stone; roof of slate. One and two
storeys over basement. The library is set out in three loosely
related parts: an entrance block of three-window range in
Bridgeman Road; a gabled main block on the corner of Bridgeman
Road and Thornhill Square; and a single-storey block to the
right of the entrance in Bridgeman Road, again with three
windows.
Flat-arched entrance in single-storey porch, the architrave
decorated with spiral mouldings; a shallow bracketed canopy at
entablature level enclosing a panel lettered 'PUBLIC LIBRARY'
and flanked by geometrical interlaced ornament, of which there
are also panels at the head of small buttresses either side of
the entrance; overlight; panelled door of original design;
flat-arched windows either side of the entrance and
three-flat-arched windows to the first floor, each under a
round arch of gauged yellow brick; these windows have impost
blocks and tympana of stone, each tympanum carved with one
letter of the alphabet on a ground of foliage, and the same
treatment is applied to the heads of other windows in the
library, in order to complete the alphabet; the first-floor
windows have 6/6 sashes of original design and bracketed
pediments over, of a type inspired by the Baths of Caracalla.
The block on the corner of Bridgeman Road and Thornhill Square
has a range of three windows to ground and first floors
flanked by tall blank round arches under parapets; the windows
separated by engaged columns with unusual capitals, those to
the first floor a simplified version of the Temple of Apollo
Epicurius at Bassae; here not only the tympana but also the
impost blocks on both floors are carved with letters of the
alphabet; over the first-floor windows are linked pediments of
the Baths of Caracalla type, over that a broad round arch of
gauged yellow brick with thin piers like a Diocletian window
but blank and filled with diaper work in purple brick, and in
the centre a corniced Portland stone inscriptional panel; over
all, a shallow quasi-pedimented gable with simplified
acroterion and antefixae in Portland stone. The return to
Thornhill Square is of four bays with flat-arched windows to
ground and first floor set back slightly from principal wall
face, each with its letter of the alphabet, and set under
similar pediments; parapet; lantern along the ridge of the
roof, with an octagonal lantern set over it, the lower part
glazed, the upper open, with a lead roof and finial.
The single-storey range in Bridgeman Road has blank round
arches under gauged brick heads either side of three windows
separated by engaged columns with no capitals running up into
impost blocks; windows heads with letters of the alphabet;
hipped roof. Cast- and wrought-iron railings designed by the
architect , either side of the porch and to the area in
Thornhill Square, with overthrow, brackets to main wall and
standards with Greek Revival details.
INTERIOR: preserves the original plan which reflects the
progressive librarianship of James Duff Brown, though the uses
have changed somewhat. Steps up to central staircase hall,
flanked by a balustrade with fasces to the panels and newel
post with urn finial. The hall has panelled dado and original
architraves and doors to the Children's Library and Children's
Lending Library (an unusual facility for 1908), but the
entrance to the main Lending Library has been slightly
altered. Geometrical stair in apse with square newel decorated
with neo-Classical ornament and urn finial, and panelled
balustrade decorated with fasces. Paterae to frieze and Greek
key ornament to panelled plasterwork of ceiling. More original
architraves and panelled ceiling to the first-floor landing,
but the various rooms, including the first-floor reading room
with its segmental barrel-vaulted ceiling, have lost most of
their fittings and such original decoration as they may have
had.
(W.A.Munford: James Duff Brown. 1862-1914. Portrait of a
library pioneer: London: 1968-).