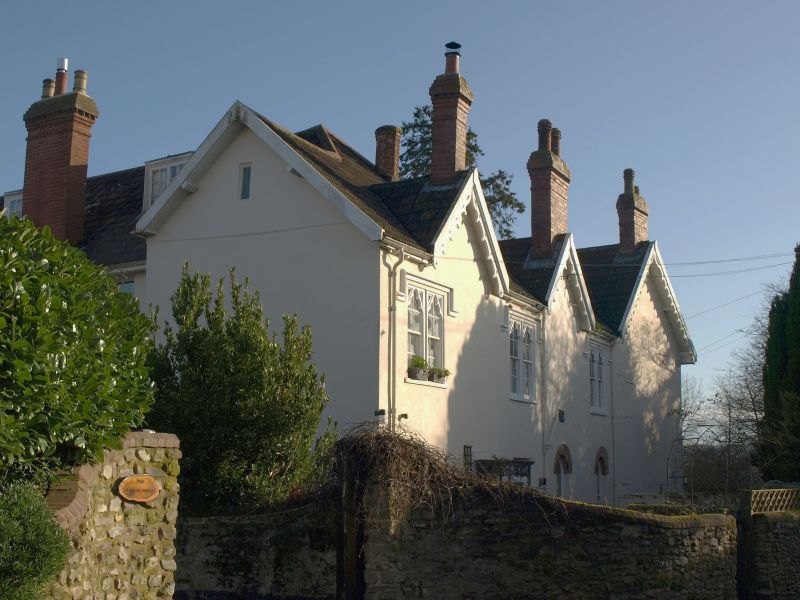 Large house. A thorough circa 1840s remodelling of an earlier house, the origins of
which are at least early C17. Colourwashed and rendered, probably stone and cob;
ornamental slate roof replaced with tiles except to the front of the ridge on the
east block, gabled at ends, with gables to the south and east; stacks with brick
shafts. The early C19 remodelling is Tudor style.
Plan: Approximately rectangular double depth plan, the main entrance on the east side
leading into a passage and a stair hall. The front (east) block is at least C17 in
origin (plank and muntin screen found during renovations) and the C17 house may have
been enlarged in the C18 before the attractive Tudor style alterations of the circa
1840s.
Exterior: 2 storeys. Good Tudor style detail including cusped bargeboards,
hoodmoulds with label stops and cusped spandrels to the windows. Almost symmetrical
5-bay east front (the main entrance elevation) with 2 gables to the front with
ornamental bargeboards and left and right ground floor bay windows with hipped slate
roofs and cusped canopies to the eaves. The slightly asymmetry probably reflects the
layout of the C17 core. C19 panelled door in the middle, some panels glazed, with a
fanlight. This is flanked by tall 6 over 12-pane sashes, probably early C19 but
perhaps pre-dating the Tudor detail. The bay windows have 3 12-pane sashes and 1 to
each return, with cusped external spandrels in the heads. 2 first floor early C19
12-pane sashes to the first floor centre, tripartite early C19 sashes to left and
right, all with hoodmoulds with label stops. 1-light attic windows to the gables.
The left (south) return, facing the road has 3 gables to the front and early C19
sashes, the first floor windows with hoodmoulds and external cusped spandrels. 2
ground floor windows right are probably 1860s 2-pane sashes with rounded heads. The
right (north) return has early C19 small-pane sashes (2 replaced with later 2 pane
sashes), several with hoodmoulds and external cusped spandrels. Recessed 2-leaf
half-glazed door with an overlight with cusped glazing bars. The rear elevation has
C19 or-early C20 timber windows.
Interior: Of the pre circa 1840 house a plank and muntin screen survives, forming the
right hand partition of the present entrance passage. The stair, with turned
balusters and a ramped wreathed handrail may be C18. Most of the joinery appears to
be early C19, shutters, panelled doors and skirting boards. 2 fine fireplaces
survive, a Gothick chimney-piece in the front right room and a large carved eared
chimney-piece in the front left room decorated with swags of fruit.
A large house with attractive and extensive Tudor style details in a good state of
presentation.