A Grade I Listed Building in St Michael's on Wyre, Lancashire 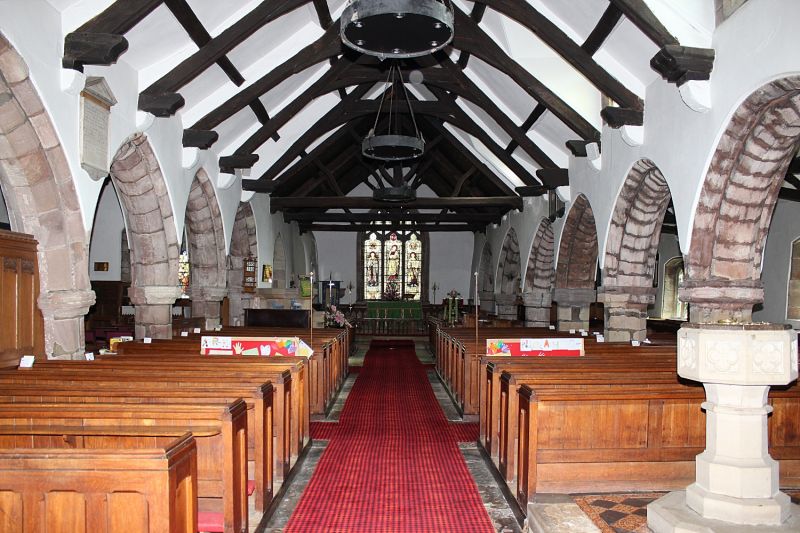 Church, possibly c.1500 with C13th remains and C17th alterations. Sandstone
ashlar and rubble. Comprises a west tower, a nave and chancel under a continuous
roof, a south aisle with pitched roof, a short north aisle at the west end, and
a north chapel. The 3-stage ashlar tower, said to be of 1549 (VCH), is of
trapezoidal plan and has angle buttresses. The upper stage is set back and
has an embattled parapet with corner pinnacles. The date 1611, carved on a
merlon together with the Butler arms, probably refers to a raising of the
tower. The bell openings are each of 2 chamfered cusped lights. The west window
is mullioned and transomed, of 6 lights under a Tudor-arched head with hood. The
west doorway is hollow chamfered in 2 orders, with Tudor-arched head and hood.
The south aisle has an embattled parapet, and buttresses. Its west window is
C19th and of 3 lights. To its left is a narrow blocked chamfered lancet, possibly
C13th. 2 rainwater hoppers on the west wall are dated '1811'. The south
windows are mullioned, of 3 lights with flat heads. To the right of the chamfered
reconstructed priest's doorway are 2 windows, double hollow-chamfered with
pointed heads to the lights. To the left is one, chamfered and with round heads
to the lights. The porch has an outer hollow-chamfered doorway with round head.
Above is a tablet inscribed '1611'. The eastern south aisle window is of 3
pointed lights under a Tudor-arched head. The east chancel window, possibly
late C14th (Pevsner), is of 3 cusped ogee lights with Perpendicular tracery under
a pointed head, the mullions being wave moulded. 2 rainwater hoppers are dated
'1811' and '1809'. The north (Butler) chapel has a pitched roof and C19th
embattled parapet. Its 2 north windows have flat heads, and hoods with carved stops.
They are of 3 cusped ogee lights with Perpendicular tracery. The east window is
similar, but only the middle light has an ogee head. Above are the Butler
arms. At the west end of the north aisle wall is a reconstructed chamfered
doorway with pointed head.

Interior has 4-bay nave arcades, and one of 2 bays to the south of the chancel.
They have octagonal piers with pointed arches of 2 chamfered orders, the arches
on the north side being more steeply pointed. The west respond of the south
aisle is said to be C13th (Pevsner). The 7 nave trusses are of light scantling
and have timber pads resting on stone corbels, and arch-braced collars. On the
south side of the nave are 3 inserted dormer windows. There is no chancel arch,
and the 3 chancel trusses have king posts rising from tie beams, each with 2 ogee
braces to the principals and with 2 ogee queen struts. One truss is said to be
dated 1736 (church guide). The south aisle has trusses with ties and with
arch-braced collars. The high tower arch is chamfered in 2 orders. In the south
chancel wall is a piscina with cusped ogee head. On the north wall are
fragments of an early C14th wall painting of the Ascension. The north chapel
windows have re-set fragments of glass, including an early C14th shield.