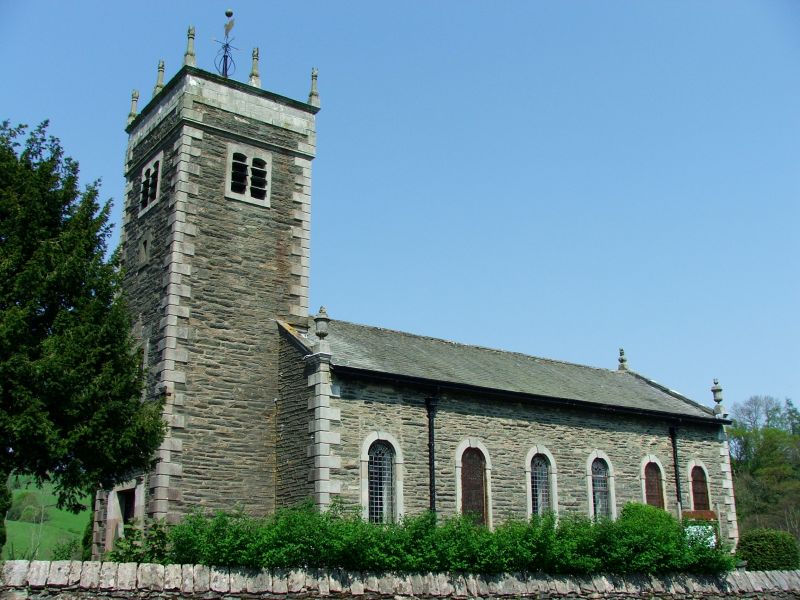 Parish Church dated 1743 on plaque, restored and North Transept added in 1877.
Roughly coursed rubble walls, sandstone quoins and window surrounds, graduated
greenslate roof and stone ridge. Stone urns to each corner. 6 bays.
Continuous nave and chancel. Square tower at West end with corniced ashlar
parapet surmounted by 8 stone flaming torches. West entrance in base of tower
has plain classical doorcase with broken pediment enclosing the coat of arms of
Robert Bateman of Reston Hall (q.v.). A plaque over the door is inscribed "This
Chapel was begun to be built Anno Domini 1743 at ye sole expense of Mr Robert
Bateman Merchant of Leghorn Born in this Hamlet but He Dying suddenly the same
year the work was ordered and appointed to be finished by his Executors". C19
studded wooden double doors fitted with wooden lock apparently dated 1682 but
very worn. East window: Venetian with rusticated central architrave within
open and broken pediment; remaining windows: arched heads with keystones and
impost blocks. Interior has coved and panelled ceiling, said to have been
plastered during C19 restoration, with continuous frieze and dentil cornice,
supported by Ionic pillars on pedestals in the chancel. East window, to memory
of Isabella Thompson and signed by Edward Frampton, is flanked by panels with
quotations from the Bible set in C19 Jacobean style panelling; C18 turned altar
rails; brass in chancel commemorating the restoration of 1877 with poem by
Wordsworth to Robert Bateman. Opening in West Tower filled with 3-stage screen
of Corinthian order. Lower stage has round-headed double doors with small
twisted pilasters, flanked by Corinthian pilasters with defaced capitals. Royal
Arms above. Marble floor sent from Italy by Bateman. C18 font with cherub
heads possibly with later pedestal.