A Grade I Listed Building in Aston-on-Trent, Derbyshire 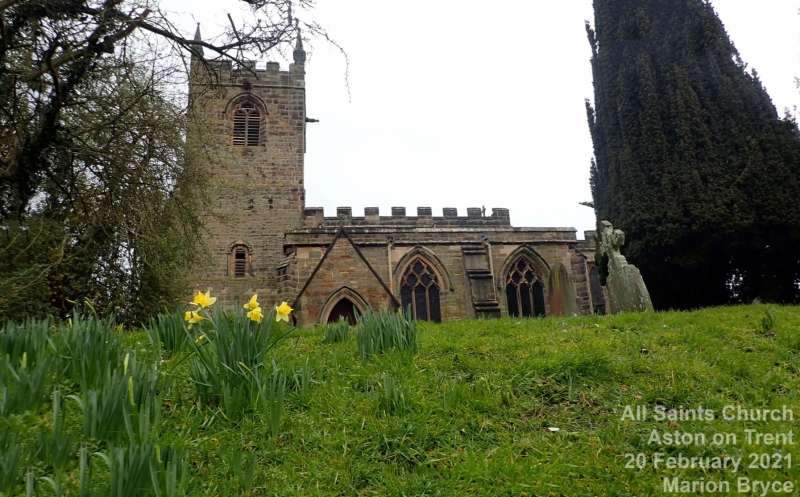 Three-stage western tower is C12 to first two stages and bell stage over is C15 and slightly narrower. It has massive stepped angle buttresses to western corners and to the west elevation there is a flush semicircular-headed door with C13 double lancet over. North and south elevations have blank first stages. Above to west is a louvred late C12 semicircular-headed window with attached nook shafts and a chevron moulded arch. North and south elevations have similar windows, that to north much restored and with roll moulded arch. Above again, west elevation has a flat headed three-light window with ogee headed lights and over this there is a C15 pointed two-light bell opening with cusped panel tracery and returned hoodmould. Similar opening to all other sides, plus a metal clock face to north side. Above coved string course has central gargoyles and embattled parapets have corner steeple pinnacles.

West elevation of north aisle has a pointed two-light window with C19 tracery and returned hoodmould, also with a continuous sill band. Set high up in the wall to south side there is a Saxon stone carved with interlace decoration, and to the north corner there is a stepped, gableted angle buttress with a large angled gargoyle over. North elevation of aisle has a C19 Early English style gabled porch to west, with double chamfered doorcase and a C14 cusped ogee headed inner door with medieval studded wooden door. To east there are two flat-headed three-light C15 windows with casement moulded surrounds and cusped headed lights with incised spandrels. To east side of each is a stepped gableted buttress. Above there are three smaller similar two-light clerestory windows. Aisle continues against chancel to east and has a similar three-light C15 window with a large stepped gableted buttress to east and two early C19 slate memorial plaques to west. Above there are three similar clerestory windows to those to nave, each partly blocked by the aisle roof. East elevation of aisle has angled gableted buttress to north side and a two-light window with cusped lights and a relieving arch.

Chancel has a three-light panel tracery east window with segmental head and returned hoodmould and below there is a slate memorial of c1746. South elevation of the chancel has three unusual, very tall C15 two-light; flat-headed windows with central transoms, the lower section of each with reticulated type tracery and the upper section with cusped four-centred arched lights and incised spandrels, all set in a deeply chamfered moulded surround. Between the eastern two there is a large stepped buttress and to west, at junction with the south aisle there is a projecting staircase turret with stone roof and attached slate plaque of c1759.

South nave aisle has angled corner buttresses to either end and a central stepped buttress to south elevation. East elevation of aisle has C19 pointed three-light reticulated tracery window with returned hoodmould, a copy of the two C14 windows to south elevation of the aisle, except these have ogee headed hoodmoulds. To west is a gabled C19 porch similar to that to north aisle and to west elevation of the aisle there is a C19 two-light reticulated tracery window. Above there are three C15 two-light clerestory windows similar to those to north.

INTERIOR has three bay north and south arcades with double-chamfered pointed arches on plain columns with crudely moulded capitals, continuous chamfered hoodmoulds, and banded spur like corbels to either end. Similar two bay arcade to north of chancel and C12 semicircular-headed chancel arch with nailhead decoration to impost blocks, above which is a blocked C12 semicircular-headed door. Pointed, continuously moulded C15 arch with moulded capitals into tower and small chamfered pointed doorcase to east end of south aisle against the chancel arch into a spiral staircase to the former rood screen.

Shallow pitched roofs, mostly C19, that to south aisle supported above the arcade by moulded C18 cornice. South aisle windows and south chancel windows all have interior mouldings, those to south aisle also with carved label stops to hoodmoulds and eastern window also with crocketed nodding ogee headed niches to base of each jamb.

Chancel has a C19 coloured marble and carved stone reredos and C14 style timber choir stalls and altar. North arcade has C20 wooden screens across the arches and beyond to east there is a small blocked pointed original doorcase. C19 Decorated style octagonal stone pulpit has figures of saints on coloured marble backgrounds to sides on a tapering stem, also with crocketed, gableted wooden tester over.

The nave has a mixture of original C17 oak pews and C20 copies. To west end of nave is a C13 stone font with a moulded octagonal bowl on a circular stem and four colonnettes. In the north aisle there is an C19 organ.

Throughout the church there are numerous monuments, the chancel has a small brass memorial in alabaster surround to Johannes Porter who died 1636 and there is a carved marble memorial to Guy Winterbottom who died 1917. In the south aisle to the east end of the staircase is a good, coloured marble memorial to Leonard Osbrooke, who died 1762, with classical aedicule and to south there is a c1680 wall memorial with shouldered surround topped by two sculls, with an illegible inscription. South wall of the aisle has two slate and white marble memorials, one with weeping woman to top to Joseph Walker, who died 1801 and the other with draped urn to top to Elizabeth Walker who died 1802. West wall has two similar wall memorials, a very simple one of c1864 and one with a draped urn to John Cocks who died 1810, signed by Cartwright of Donington. There is also a carved alabaster plaque to Col Chandos Pole who died in 1900.

Inside the tower to either side there are three small, simple marble and slate memorials, all to the Roby family, dating from about 1840 to 1860. There is also presentation of the clock in 1890 in memory of Edward Holden of Aston Hall. To south side of the tower arch there is a brass roll of honour and to the north there is an early C19 marble memorial. The west end of the north aisle has two wall memorials, one in slate c1837 and the other with marble plaque in slate gothick aedicule to James Sutton of about c1830. To east there is a large collection of memorials including an early C15 alabaster chest tomb with two life size effigies and base decorated with angels holding shields. Above this is a c1777 wall memorial to Mary Shuttleworth with decorated oval plaque topped by draped urn on bracketed cornice and another to Antonia Clowes who died 1849, which has a white dove set against a slate background and is signed by White of London. To east there is a simple plaque with an elaborate shield above to Jacob Shuttleworth who died in 1744 and below is an oval slate memorial with draped urn over, to Rosamond Holden who died 1820. There is also a small C17 plaque in plain surround with a large painted achievement over and an illegible inscription. To west there are two memorials to the Holden family, one of 1821 with carved book to the top and the other of 1862 with a pointed aedicule. On the opposite wall there are two slate and white marble memorials, both with draped urns to the top, one to Elizabeth Holden who died 1795, the other to Mary Shuttleworth who died 1791. In the vestry beyond to east is one memorial to Nathaniel Johnson of c1830 and a slate plaque to the sons of John Rolleston who died between 1741 and 1763.