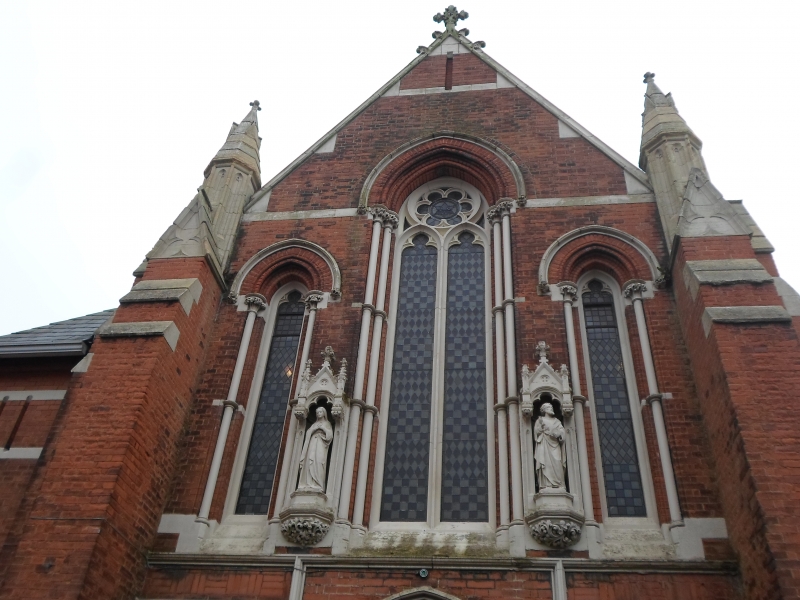 Late Victorian gothic style Roman Catholic church and attached presbytery by the architectural practice of Smith, Brown and Lowther of Hull, 1893-4.The later church hall attached to the west of the church is not included in the listing.

MATERIALS: red brick with Hoptonwood stone dressings, Welsh slate roofs with terracotta cresting.
PLAN: the church is orientated with its chancel (the ritual east end) to the south, and its entrance front to the north. The presbytery is adjoined to the east, connected by a shared, enclosed porch. The church has a nave with side aisles, the chancel also being flanked by side chapels. The later church hall attached to the west of the church is not of special interest.

EXTERIOR: architectural elaboration is focused on the road frontage to the north, the ecclesiastical west end. On this elevation, the nave is supported by angle buttresses which rise above the eaves as stone pinnacles, the gable being raised and stone coped, topped by a stone cross finial. Between the buttresses there is the main entrance with its moulded brick, two-centred arch with a stone trefoil arch within and enclosed by a stone hoodmould with label stops. This is flanked by ground floor, two-light windows with geometric tracery and similar stone hoodmoulds. Above there is a tall, two-light window which is headed by a cusped circle in the tracery, this is flanked by trefoil headed lancets, these three windows each being flanked by engaged columns with leaf capitals. Flanking the central window are statues of Our Lady and St Peter, both protected by stone, gable-roofed canopies. The side aisles have trefoil headed lancets with hoodmoulds, the aisle to the left (east) being heightened to accommodate the organ chamber. Beyond to the east and linking with the presbytery there is a porch which a room above. This porch has a double, part-glazed door set beneath a stone Carnarvon arch with a shallow, two-centred brick relieving arch above which frames a stone relief carving of a head framed by foliage.
Remaining elevations of the church are simply detailed, windows to both clerestory and aisles being plain lancets with stone cills but no other dressings. The chancel, the roof of which is continuous with that of the nave, has a canted end lit by three two-light windows set at clerestory level.
The church hall attached to the west side of the church dates from the 1960s and is not included in the listing.

INTERIOR: the nave is of five bays, the northernmost occupied by a choir and organ gallery. The arcades have octagonal piers, moulded capitals and pointed arches with two orders of hollow mouldings set below hoodmoulds. The windows have hoodmoulds with label stops and are glazed with square and diamond quarries of clear and pink glass. The roof is canted and boarded, the arch trusses being carried down the clerestory walls to be supported by corbels.
The chancel is separated from the nave by a high chancel arch supported by triple columnettes rising from foliate corbels. The main chancel windows have memorial stained glass depicting saints. The marble high altar incorporating a tabernacle and canted reredos originally came from the Roman Catholic church of St Patrick, Middlesbrough.
The windows of the side aisles are treated the same as those of the clerestory except five have been reglazed with figurative stained glass as memorials. The aisle walls carry reliefs set in quatrefoils forming the Stations of the Cross. The west side aisle has an inserted set of folding doors* giving access through to the attached church hall*, these doors and the hall are not of special interest. The side chapels are vaulted and lit by further stained glass windows. The eastern chapel has a stone and marble altar and reredos incorporating a statue of Christ the Sacred Heart.

PRESBYTERY: the exterior appears as a typical two storey two bay late Victorian house with large rectangular projecting double height bay window. The feature that sets the house apart and identifies it as the church's presbytery is the entrance which features a highly ornate gothic surround imitating an embattled, gabled porch. The house has modern replacement windows* and extension to the rear*, these alterations not being of special interest, but retains its original chimneys and the terracotta cresting and finials to the hipped roof. The interior retains an encaustic tiled hall, and much original joinery included a closed string staircase. Fireplaces* are later replacements which are not of special interest.

* Pursuant to s.1(5A) of the Planning (Listed Buildings and Conservation Areas) Act 1990 (‘the Act’) it is declared that these aforementioned features are not of special architectural or historic interest.

The Roman Catholic church of Our Lady and St Peter with its adjoining presbytery was designed by the Hull firm of Smith, Brown and Lowther and opened on 1st September 1894. It was commissioned by the town's third post-reformation Catholic priest, Fr. James Clancy, the £1,870 cost being largely paid for by Mrs Mousley (nee Boynton).