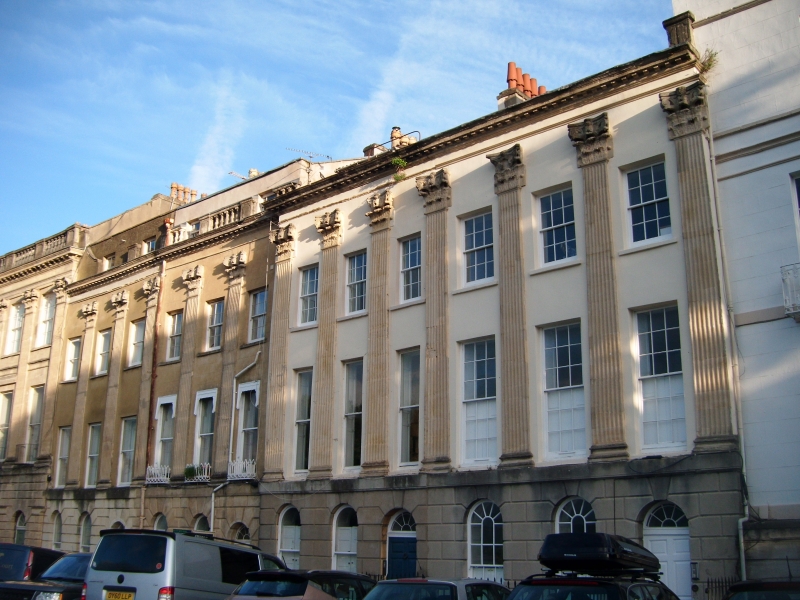 Terrace of 10 houses. Retaining walls begun 1782 by William
Watts, centre pair of design, probably by John Eveleigh,
c1790, completed to a much reduced design by John Drew 1807.
Limestone ashlar and render, party wall stacks and slate
mansard roofs. Double-depth plan. Late Georgian style. Each of
2 storeys, attic and basement; 3-window range.
A massive raised retaining wall and terrace below a composed
palace front with a slight concave curve, has the end and
middle pairs broken forward, the latter slightly raised;
ashlar rusticated ground floor, rendered apart from Nos 5 & 6,
to a band, fluted Corinthian pilasters to the upper floors, a
full entablature to Nos 5 & 6 only, the rest have a thin
string and modillion cornice, with dies and balustrade, ramped
up to the centre section.
Semicircular-arched ground-floor openings with incised
voussoirs; lower right-hand doorways have 5-pane fanlights,
No.1 has a teardrop fanlight with a lantern, reeded transom
and 6-panel doors with reeded flush lower panels. 6/6-pane
sashes, 9/9-pane first-floor sashes, with 6/6/6-pane triple
sashes to No.5, and wrought-iron basket balconies with
cast-lead decoration to Nos 2, 4, 5, 6 and 8; third-floor
windows below the cornice to Nos 2-4, attic storeys added to
Nos 7 & 8.
The left return has rounded corners and a single-storey porch
with semicircular arches, 3 to the side, with imposts, and a
canted first-floor bay. Steps down to basement areas and
doorways.
INTERIOR: centre pair: entrance hall divided by a semicircular
arch from a central toplit lateral open-well stair with stick
balusters, ramped rail and curtail; marble fireplaces have
moulded jambs and corner roundels, first-floor front rooms
have marble fire surrounds with moulded jambs with wreaths and
bouquets; arched recesses to ground and first floors;
elaborate cornices, 6-panel doors and panelled shutters. No.6
has round glazed lights set in the ground-floor stair treads.
SUBSIDIARY FEATURES: attached spear-headed wrought-iron
basement area railings and gates.
HISTORICAL NOTE: most of Watts' capital was spent on the
massive revetment (qv) on which the terrace was built. Begun
by Eveleigh as a larger crescent, but only the middle pair was
built before the financial collapse of 1791. John Drew
completed the project to a confused version of the original.
Hannah More the noted educationalist died at No.4 in 1833.
Painted by Samuel Jackson in c1825 & 1839. Part of the
visually very important view of Clifton from across the Avon.
(Gomme A, Jenner M and Little B: Bristol, An Architectural
History: Bristol: 1979-: 219; Ison W: The Georgian Buildings
of Bristol: Bath: 1952-: 226; Greenacre F and Stoddard S: The
Bristol Landscape, The Watercolours of Samuel Jackson:
Bristol: 1986-: 41, 55).