A Grade I Listed Building in Tewkesbury, Gloucestershire 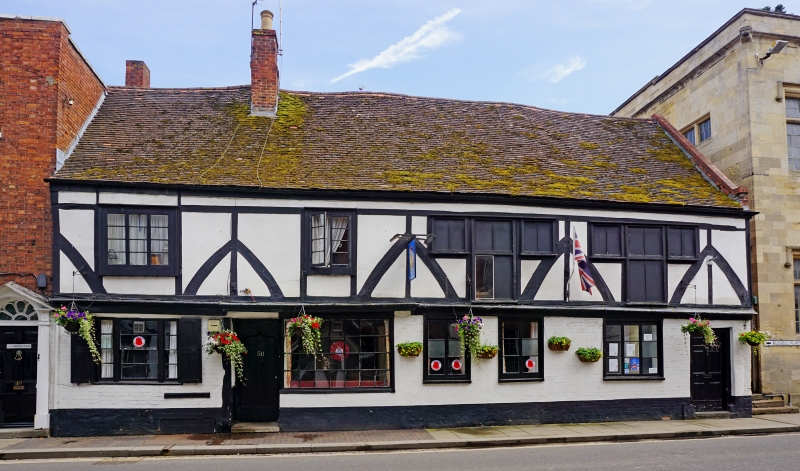 Formerly known as: Mason's Arms CHURCH STREET.
Club building, formerly an inn. Late C15, much modified C19
and earlier. Timber-framing, brickwork, tile roofs.
PLAN: formerly part of the extended row Nos 35-51 (qv), this
was end of terrace; long jettied block, now under-built to
street, with deep wing to back.
EXTERIOR: street front 2 storeys and basement, 4-windowed. At
first floor, in braced box framing, C18 three-light and
2-light casements with horizontal bars to No.50, and 2 triple
2-light casements with central unit taken down to bressumer
level to No.51.
Ground floor, in brickwork, has 4:12:4-pane triple sash and a
multi-pane C18 shop front to No.50 returned to deep-set early
3-plank door in heavy post framing and to cusped flat ogee
head. Two 2-light and one 3-light casement with bars, and
6-panel door to No.51. Cellar grille far left; small brick
stack in front of ridge near left end. Right return is plain
brick with raised brick-coped gable on kneeler.
Deep back wing to framed gable end, in 2 storeys, with large
eaves stack and small ridge stack. Overlooking adjoining No.49
(qv) are various casements, and an early 2-light gabled
dormer. Back of main block with various additions.
INTERIOR not fully inspected; roof structure said to be
concealed but assumed to be as in other parts of the terrace.
Remains of wide C18 fireplace with shouldered architrave,
heavy chamfered beams, a panel of wattle and daub under glass
frame, and early plank door to cellar. In a back room a very
wide but blocked fireplace. Some heavy braced framing, but
much is concealed by later ceilings and panelling.
Of outstanding interest as part of a medieval terrace, built
as a speculative development for Abbey (qv). Unlike others in
the terrace (qqv 35-38 & 41-48) the early structure has not
been opened up in this property, but it was clearly part of
the whole terrace, and is graded accordingly; the recessed
placing of the early door shows extent of the former jettying.