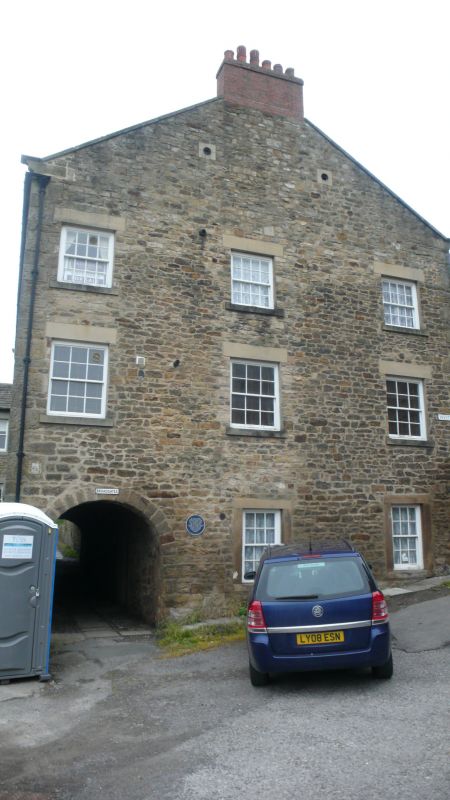 Methodist chapel, now flats, and associated cottages. Former
chapel and extension dated 1764. Restored c1970. Rubble with
irregular quoins and ashlar dressings; roofs of stone slates
with stone gable copings.
EXTERIOR: chapel 3-storey, 3-window, range on east elevation
and 2 and 3-storey, 3-window range on longer south elevation
to Broad Gates, with 2-storey rear cottage extension across
small yard at higher level. East elevation to the Demesnes has
round-headed arch with voussoirs over Broad Gates at left;
flat stone lintels and projecting stone sills to 2
ground-floor sashes with glazing bars; similar windows on
upper floors. Roof has stone gable copings on narrow moudled
kneelers, and C20 chimneys front gable and on ridge.
South elevation to Broad Gates has plain stone surrounds to 3
tall round-headed sashes, and door between second and third
windows; 3 sashes on top floor are similar to gable lights.
Date stone in west gable of chapel facing yard. West cottage
attached to chapel has side steps to renewed door in plain
surround; sashes with glazing bars.
HISTORY: this chapel replaced the Hole-in-the-Wall meeting
house (qv) in 1764, was opened by John Wesley, and itself
replaced in 1822 by the Wesleyan Chapel behind No.40, The Bank
which is now demolished. In 1894 the congregation opened the
Trinity Methodist Church in Galgate (qv).
(Anthony Steele: The History of Methodism in Barnard Castle
and..the Dales...: London: 1857-: 71).