Former Entrance to Deansgate Goods Station Including Numbers 223 to 233 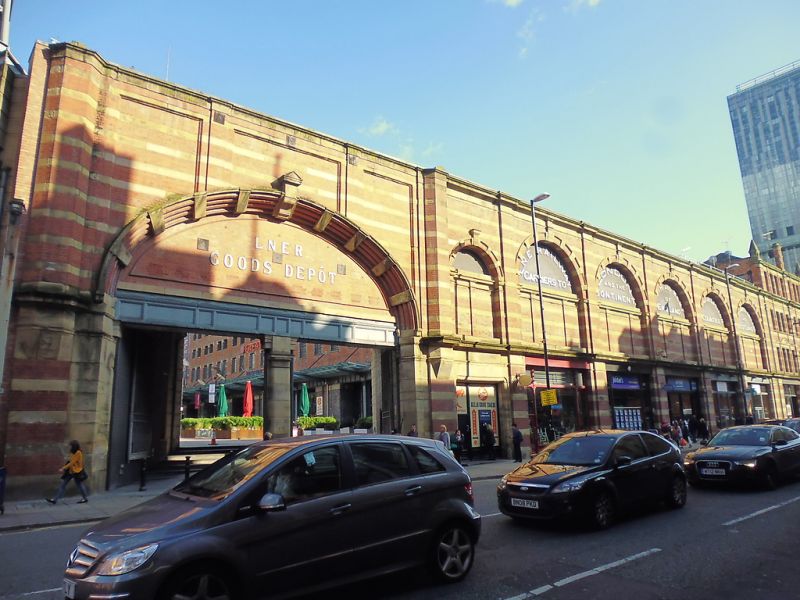 Entrance to former railway goods station. 1899. Red brick with
sandstone dressings. A screen wall comprising 7 bays of blank
arcading divided by giant pilasters. Stone bands, frieze,
cornice and blocking-course. In the left bay is the former
station entrance (now pedestrian access to car park) with twin
segmental vaults to the covered way which is set at an angle
and fronted above by a massive blind segmental arch of 4
moulded brick rings with pedimented stone keyblock and
radiating stone blocks of similar design; splayed pilasters at
either side of covered way which is now blocked on right-hand
side. The tympanum has raised block lettering "L.N.E.R. GOODS
DEPOT". The remaining 6 bays (including a half-bay to right of
entrance) have blank arches of similar character, with C20
shop-fronts at ground floor, and the tympanum of each arch
with raised lettering giving the destinations of the railway.
Forms group with Nos 235 to 291 (odd) which form a very long
continuation to the right (q.v.).