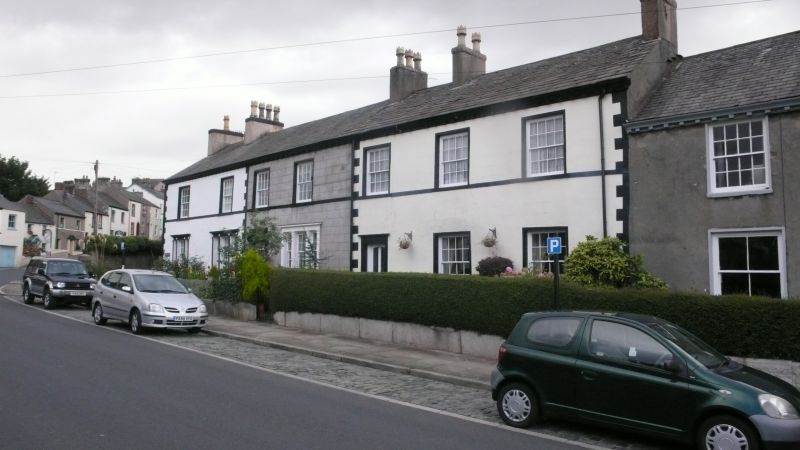 Row of 3 houses built as 1 property. Early C19. Cement
rendered, graduated slate roof. 2 storeys, 2:2:3 windows to
1st floor; extended rear wing to No.15 on right. Original
doorway to No.14 has 4-panelled door and overlight in
architrave beneath cornice on consoles. 2 tripartite windows
to No.13 on left and another to No.14 on right; the window
surrounds with sill blocks, pilasters, paterae and cornices;
various unequally-hung sashes with glazing bars. 1st floor:
16-pane sashes to No.13 and 6-pane sashes to No.14; all with
projecting sills and thin surrounds. No.15 has been altered:
present doorway with corniced surround in position of former
carriage archway (only seen from rear); C20 casements with
projecting sills and raised surrounds. The range has ogee
cast-iron gutter on blocks; rendered end stacks and 3 ridge
stacks, 2 of which flank the former carriageway. Rear: wing to
No.15 ends as a 1-storey outbuilding (in separate ownership)
with side door flanked by large casements; the end gable with
external stack between ashlar oculi. INTERIOR: No.14 has
original staircase and stair hall features including blocked
arch through to No.13. No.13 has limestone fireplace with
acanthus consoles; 2 mahogany 6-panel doors, 1 in architrave
with rosettes, the other within basket arch; panelled window
shutters.