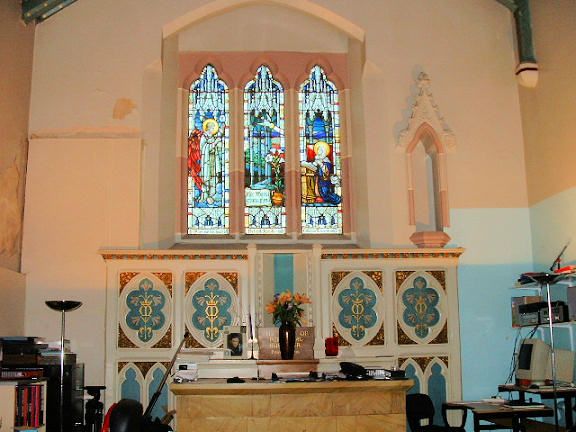 Roman Catholic church. 1842, by Augustus Welby Northmore Pugin.
Red brick in English bond, with sandstone dressings and slate roof.
Early English style. Nave with north and south aisles, confessionals
attached to south aisle, uncompleted north-west tower, chancel
with north chapel. The 6-bay nave has small lancet clerestory
windows, and its west end has a 2-centred arched west doorway
with double-chamfered surround, and 2 lancet windows above.
The aisles have pilaster buttresses and narrow lancets: the
south aisle has a gabled porch to the 2nd bay with
double-chamfered 2-centred arched doorway, and 3 gabled
confessionals each with 2 small lancets and a quatrefoil
above; and the base of the intended tower at the west end of
the north aisle has a 2-centred arched doorway with 2 pairs of
shafts and 2 orders of deeply undercut double roll-moulding,
and a hoodmould with figured stops, a niche above the doorway,
and a pyramidal roof. The 2-bay chancel has a triple-lancet
east window with linked hoodmould, and a wheel window above.
Interior: plastered and painted in shades of light grey; aisle
arcades of tall double-chamfered 2-centred arches on low
octagonal piers, chancel arch with semi-octagonal responds and
triple chamfer; nave roof of elegantly slender collared
queen-post trusses with unusual linking purlins arch-braced
from these posts, and arch bracess from wall-posts to
tie-beams, all these members with painted small chamfer;
statue of Virgin to left of chancel arch, with tall crocketed
canopy, and pulpit to right integrated with the pier on that
side and entered by a doorway through it; west gallery with
tall narrow organ in centre; sedilia in chancel; good stained
glass in east windows.