A Grade I Listed Building in Rumburgh, Suffolk 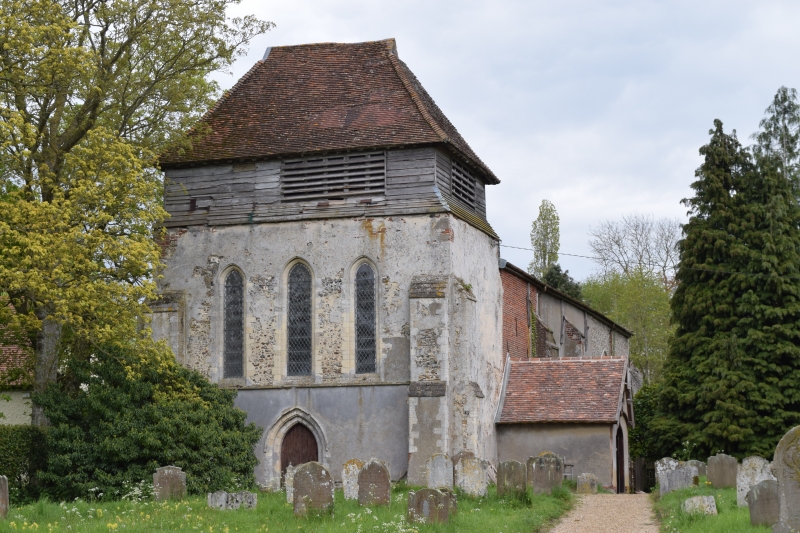 Church of England Parish: Rumburgh with South Elmham All Saints St Michael and All Angels and St Felix

Parish church, originally built as the church of a Benedictine Priory, founded
c.1065 from Hulme, Norfolk and given in the later C12 to St. Mary's, York.
C13 and C15. Nave, chancel, west tower and south porch; random flint, part
rendered, part red brick repaired with freestone dressings; shallow-pitched
lead-covered roofs. Unusually-proportioned C13 west tower, as wide as the
nave, with low angle buttresses and a timber-framed and weatherboarded top
stage with a hipped, plaintiled roof. The small west door has a continuous
double chamfer, and above are 3 tall lancet windows, the middle window taller
than others. Inside, the tower arch is very high. Early C16 south porch with
early C19 Gothick exterior: ogee-headed doorway; panelled double doors;
timber roof inside with embattled cornice. 2-centred arch to south doorway
with simple chamfer and Gothic panelled door. Continuous mid C15 nave and
chancel with 2-light traceried windows along the south side. Fragments of old
glass, and bullseye glass in the tops of the lights. There were no original
windows along the north wall, which was backed by the conventual buildings,
but 2 2-light rectangular windows with diamond-leaded panes were inserted into
the nave, probably C17. Nave roof in 11 bays: arch-braced, the collars
triangular in form, extending into the apex. Cavetto moulding to braces,
collars and purlins, and large flowers, somewhat damaged, at the intersections
of purlins and principal rafters; embattled cornice. 3 later tie-beams with
king-posts have been needled and bolted through the walls. The 11th bay, at
the west end, is different from the rest, being quite plain, with the purlins
at a different level and no cornice, and seems to have been fitted in at a
later stage. Font, on a low octagonal base, with panelled shaft, replaced
bowl and simple Jacobean cover with spike finial. A set of good poppy-head
bench-ends, some replacements, all with different designs; later benches and
panelled backs, 2 with a Jacobean frieze of formalised leaves. A very fine
high chancel arch screen: 8 one-light divisions with applied tracery to the
panels at the base and ogee heads with drop tracery; intricate carving to the
tops of the lights. A small, simply-panelled Jacobean pulpit dated 1637 on a
single shaft with supporting scroll brackets. The nave floor is of old floor-
bricks, and there is a row of C18 black ledger slabs commemorating members of
the Davy family. Victorianised chancel. Restored east window. In the north
wall, a C13 doorway and a narrow squint with a grated watching-window above:
these all related to the conventual buildings adjoining.