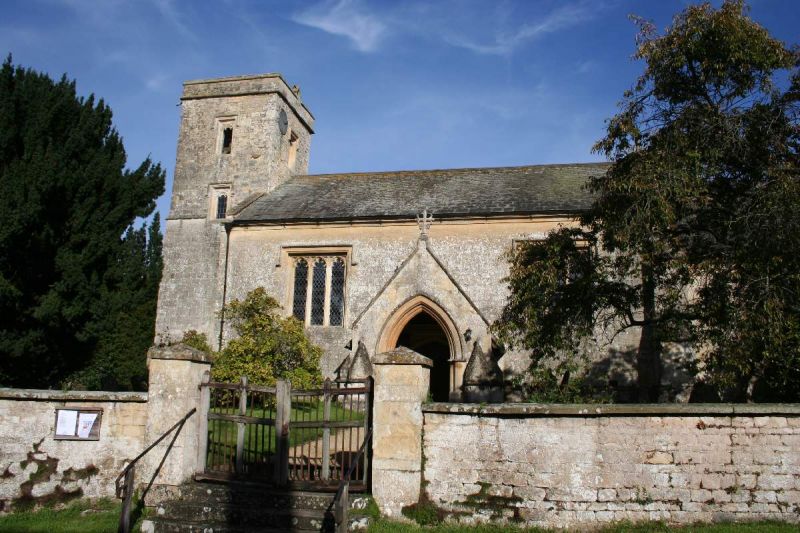 Church. Late C15 for Thomas Danvers, Lord of the Manor; nave and chancel rebuilt
1790, and restored 1857 by G.E. Street. Limestone ashlar; stone-slate roofs.
Nave, chancel, north aisle, west tower and north and south porches. Chancel has
C19 windows with Geometrical Decorated tracery, and the C19 vestry, to north,
has square-headed windows. South wall of nave, with moulded eaves and plinth,
has a C14 style porch, sheltering an elaborate 4-centre arched doorway, between
2 square-headed 3-light windows, probably all by Street. The C15 model for the
windows is on the north side of the nave. The C15 north aisle has an arched
3-light east window, with Perpendicular tracery, and 3-light square-headed
windows to north and west. A small stone C19 porch with trefoil arch shelters a
plain Tudor-arched doorway. The 2-stage C15 tower has small openings with labels
plus a 2-light arched Perpendicular west window. Interior: Chancel arch and
2-bay north arcade have concave-sided octagonal piers and responds. Fittings are
all C19 and include a painted metal-sheet reredos. Stained glass in the north
aisle includes C14 and C15 donor figures in the cusped heads above an armorial
window entitled "The Genealogie of the family of the Asshehursts", plus C19
glass in the aisle east window; mid-C19 windows by Willement in the chancel and
tower. Monuments include a large wall monument to George Croke (died 1641) with
a painted demi-figure on an inscribed plinth framed by Corinthian columns
supporting an open segmental pediment; also a Baroque cartouche to Francis Hinde
(died 1720). The C15 work is attributed by John Harvey to William Orchard.
(V.C.H.: Oxfordshire, Vol.VII, pp.227-9; Buildings of England: Oxfordshire,
pp,828-9),