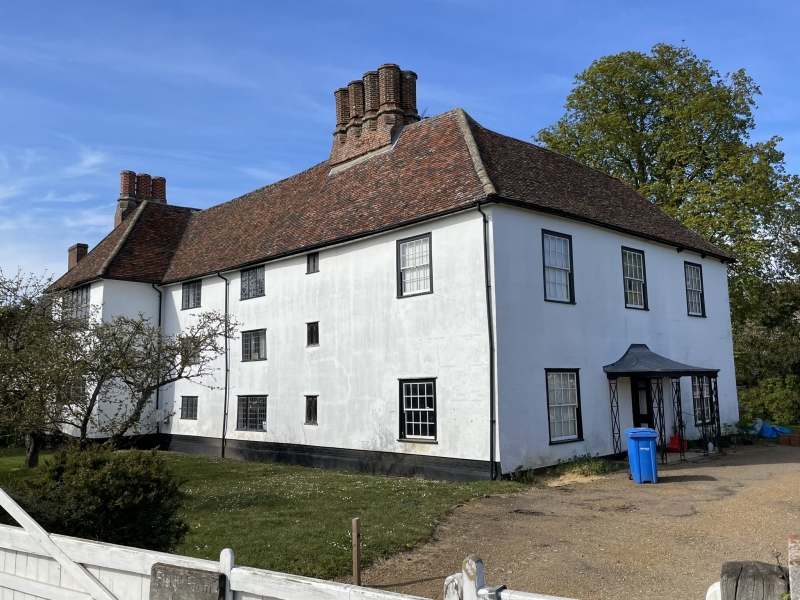 Farmhouse. Late C16, early C17 and late C18/early C19. Timber-framed,
rendered and lined: plaintiles to front slopes of roof, black-glazed pantiles
to rear. The house is of irregular form, and unusually high. The C16 main
range is aligned north-south. 3 storeys and attics. Large internal chimney-
stack with 8 octagonal shafts, moulded at cap and base. 2 early C18 3-light
casement windows with square leaded panes to first and second storeys, one
similar window and one C20 replacement window on ground storey, and one small-
paned sash window in flush frame at the south end. To the north of the main
range, and apparently contemporary with it, a cross-wing, aligned east-west. 3
storeys. A chimney-stack, with 3 shafts matching those in the main range, is
set just within the frame of the north wall. At the south end of the main
range, a wing aligned east-west, with a new principal front was added in the
early C19. 2 storeys, 3 bays. Fully hipped roof. 3 window range: small-paned
sashes in flush frames. Central half-glazed entrance door, recessed, in a
reeded surround, with panelled sides to jambs. 3-sided cast iron openwork
porch with tented lead-covered roof. Extensions at rear: in the north-east
angle, a small early C17 2-storey wing in red brick with a 3-light ovolo-
moulded mullion-and-transome window in the upper part of the gable. To the
north of this, a 2-storey lean-to, mid C19, in red brick with black-glazed
pantiled roof: casement windows with arched heads to brickwork. To the east, a
single-storey lean-to, mid C19, in flint rubble with pantiled roof.