A Grade I Listed Building in Fakenham Magna, Suffolk 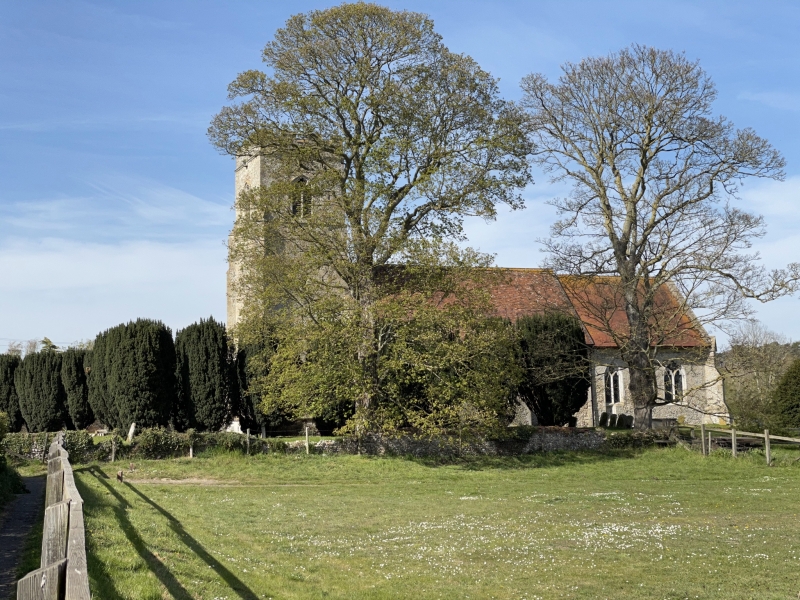 Parish Church. Nave, chancel, south porch and west tower, all in rubble flint
with freestone dressings, and remains of original external rendering.
Plaintiled roofs. An ornate cross on the east gable, and another on the porch.
Porch extensively restored in mid C19. To east and west 2 C15 2-light windows
with cusped heads to lights and flat arches. On east side of south door, a
cusped niche for a holy water stoup. The north-east and south-east angles of
the nave have Saxon long-and-short work in the quoins. C14 gabled diagonal
buttresses on north-west and south-west. There is a blocked slit window
immediately to the west of the porch roof, and another in the north wall. The
nave has 4 C14 2-light windows with cusped heads to lights: 3 have unusual
triangular heads. Blocked C13 north doorway. The south doorway has a C19 door
with reused C17 wrought iron hinges and a ring handle with the boss in the form
of a mask, said to be C14. Chancel has diagonal buttresses on north-east and
south-east. 3 2-light windows on south side 2 with remains of medieval stained
glass, some grisaille: the westernmost, cusped, C14, with a small blocked low-
side window below it: in the centre, 2 C13 lancets with late C19 stained glass,
the easternmost C19 altered. 3-light C14 east window with stained glass of
1866/7. A mid C19 vestry added to north side of chancel. Interior heavily
restored in 1859. Font, benches, pulpit, lectern and chancel furnishings all
of that date. Nave paved with C18 tiles in cream, red and black. Plain C17
roof: arch-braced, 2 rows of butt purlins, no ridge-piece or tie-beams. Wide
internal splays to all windows: fragments of old glass in heads of lights.
Blocked door to rood stair in north wall. Restored C15 screen, with remains of
original carving and colouring. Chancel has remains of piscina and sedilia on
south wall. Table-tomb on north of sanctuary with long inscription and family
history of Mr. Reynolds Taylor (d.1692): arch above infilled with late C19
floral panels. A late C17 holy table, and 2 high-backed carved chairs of the
same date. Organ, 1867, on north side, blocking vestry. Tower in 3 stages:
chequerwork base, embattled top. Diagonal buttresses at the south-west and
north west corners. On west wall of lowest stage, a 2-light C14 window, with a
tiny slit window on its north side which lights the internal stair-turret. A
small rectangular window on each face of the second stage, and a 2-light C14
window on the north, south and west faces of the top stage. On the east, a
plain single-light window with arched head. On this wall, the higher line of a
earlier nave roof can be seen. In the base of the tower, 4 carved C13
sepulchral slabs with crosses, one attached to the north wall, the other 3
along the west wall. 3 bells. Graded I for Saxon work and remains of screen.