A Grade I Listed Building in Knook, Wiltshire 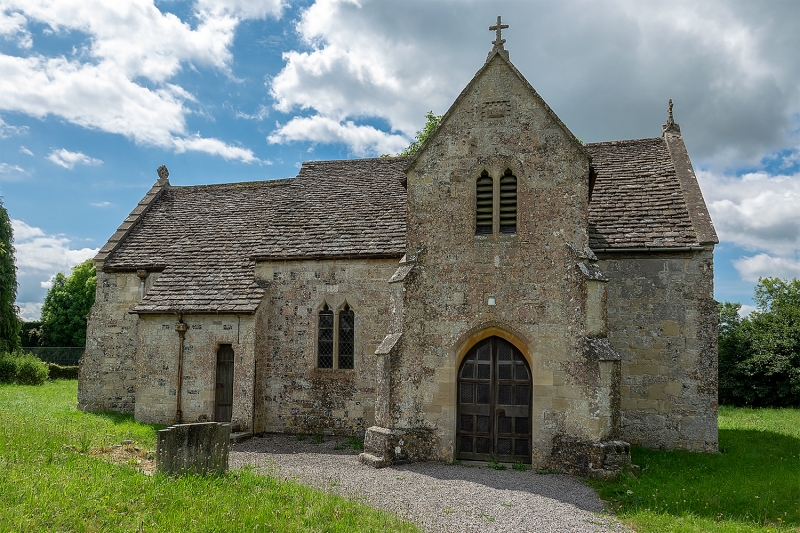 Anglican parish church. Built in the late C11, with C14, C17 and mid-C18 alterations and additions. Restored 1874-76 by William Butterfield.

Anglican parish church. Built in the late C11, with C14, C17 and mid-C18 alterations and additions. Restored 1874-76 by William Butterfield.

MATERIALS: dressed limestone with some flint under a stone-slate roof with coped verges with cross finials.

PLAN: the church is orientated west to east and comprises a nave and chancel with early –C17north porch, and late-C19 north vestry.

EXTERIOR: the two-storey north porch has diagonal buttresses, a C19 double-chamfered pointed archway, and a pair of C19 cusped ogee lancets with louvres to the first floor. In the apex of the gable is a datestone inscribed 1623 and the name of a churchwarden which is partly illegible. The nave has a pair of restored cusped ogee lancets to left of porch. The vestry is attached to the north side of chancel and has a shouldered, chamfered doorway in its north wall and a trefoiled lancet in the west. The east end of the chancel has pilaster buttresses and three chamfered round-headed windows, all C19. The south side has two C19 round-arched windows to the chancel, while the nave has a projecting C19 stone stack with cylindrical ashlar top, and a C19 window of two cusped ogee lancets and a quatrefoil. To the left (west), protected by a C19 framework with a coped gable, is a blocked doorway with a tympanum with zoomorphic carving, and attached shafts and capitals, all believed to be C11. The west end of the nave has a chamfered, trefoiled window, probably C14, and two C19 trefoiled ogee-headed lancets over.

INTERIOR: the porch has single fixed stone bench, and a chamfered Tudor-arched doorway with C19 planked door with ornamental strap hinges leads into the church. The walls of the nave are plastered with exposed dressings, and it has a plastered, shallow barrel-vaulted ceiling with two moulded tie-beams, one dated 1740. There are polychrome tiles and cast-iron heating grilles to the floor. In the south wall is a blocked rounded-arched doorway. The chancel arch has C11 carved corbels supporting a wooden arch-braced beam with pierced quatrefoils, by Butterfield. The chancel has a two-bay plaster wagon roof and there is a chamfered shouldered doorway in the south wall leading to the vestry.

FITTINGS: behind the altar is a limestone reredos with Anglo-Saxon interlaced carving; the stained glass in the east windows, in memory of Elizabeth Lady Heytesbury who died 1874, is by Alexander Gibbs; and the brass on the south wall, to John Morgan and his wife, is dated 1592. Set into the floor at the extreme west end is a worn C14 funerary slab. The octagonal marble font on a stone octagonal plinth and the organ are both C19, and the pews, pulpit and communion rail also all date from the 1870s. There is one monument at the west end, a black and white marble tablet in memory of Brouncker-Thring, buried 1787, and his family, by Harris of Bath.

Documentary evidence, including the register of St Osmund, bishop of Salisbury from 1078, indicates that the earliest church in Knook was wooden and was replaced in stone probably towards the end of the C11. Within the present Church of St Margaret there are decorative elements, described as being Anglo-Norman, such as the chancel arch capitals and a tympanum to a blocked doorway in the south wall that are of that period, and the overall plan of the Norman structure survives. Some minor improvements were made to the church in the C14, principally the insertion of slightly larger windows to the north and west, and a two-storey porch was added in 1623. Pevsner (see Sources) suggests that the porch was meant to carry a tower, but there is no evidence to support this. By 1740 the church needed to be rebuilt. The churchwardens’ presentment stated that both the chancel and the nave were ‘out of repair’.

By 1874 major restoration was required. The faculty, dated 4th July 1875, declared the church ‘to be in a state of general decay’ and that it was ‘disfigured by an unsightly western gallery’. The masonry was to be repaired and restored where necessary, the roof repaired and re-slated, and a vestry to be built on the north side of the chancel. William Butterfield (1814-1900) one of the most important architects of the High Victorian period carried out the restoration. The total cost was £750, of which £600 was given by Lord Heytesbury, patron at the time of the restoration; the rest came from other donations.

The Church of St Margaret, a building with C11 origins and restored by William Butterfield in 1874-6, is listed at Grade I for the following principal reasons:
* Architectural interest: for the survival of a considerable amount of medieval fabric and for its sympathetic and harmonious restoration by William Butterfield;
* Artistic interest: the Anglo-Norman stone carvings are important surviving sculptural elements and have a high degree of artistic interest;
* Architectural quality: the mid-C19 restoration demonstrates a light and sensitive touch, and a great subtlety in its detailing and use of materials;
* Importance of designer: the restoration is the work of a nationally-important C19 architect, while Alexander Gibbs, a notable designer, was responsible for the stained glass.