A Grade I Listed Building in Lowdham, Nottinghamshire 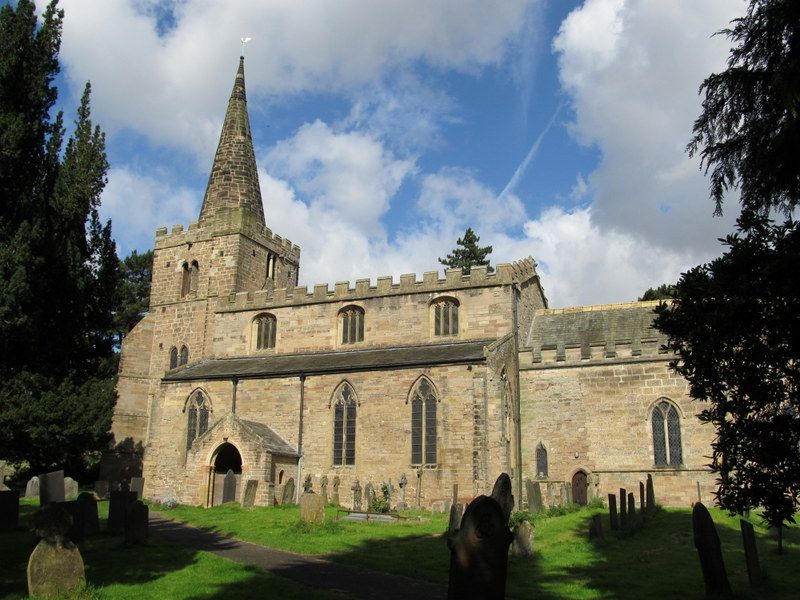 Parish Church. C13, C14, C15, 1821 restored by Scott 1860, spire
repaired 1883, chancel restored 1890. Ashlar. Slate roofs.
Embattled parapets to all but the aisles, porch and vestry which
have coped gables. Tower with spire, nave, aisles, south porch,
north vestry and chancel. Buttressed. Early C13 tower set on a
plinth with moulded band over, of 3 stages with bands and topped
with a C15 spire. Large diagonal buttresses the south inscribed
"Erected MDCCCXXI", with stair turret to the south east. Single
central gargoyle to each side. West side with C13 lancet. South
side on 2nd stage has a single opening with 2 pointed arched
lights and single central restored attached column with moulded
capital. West, east and south bell chamber openings each with 2
round arched lights and single central attached column with
moulded capital. The north side has a single pair of C19
rectangular openings. Stair turret with 3 narrow arched openings
in the re-entrant angle. The north aisle is set on a moulded
plinth, the west wall has a single arched C14 2-light window with
cusped tracery, hoodmould and human head label stop to the left.
The north wall has a moulded arched doorway with hoodmould and
worn human head label stops. To the left are 2 similar C14
windows with hoodmoulds and human head label stops. Clerestory
has 3 C14 arched windows each with 3 cinquefoil archedlights. to
the left of the aisle and set back is the C19 vestry with 2 pairs
of Caernarvon arched lights. the east wall has a single pair of
pointed arched lights. The chancel is set on a shallow chamfered
plinth and has a continuous sill band. The north wall has a
single pointed arched window with Y-tracery and C19 hoodmould.
Diagonally buttressed east end with single arched window with 4
pointed arched lights, tracery, C19 hoodmould and label stops.
The south chancel has 2 windows each corresponding to that of the
north chancel. To the left is a moulded pointed arched doorway.
The east wall has a single early C14 window similar to that of
the east chancel with hoodmould and worn human head label stops.
The south wall has 2 pointed arched C14 windows each with 2
arched lights, cusped tracery, hoodmould and human head label
stops. To the left is the porch with moulded arched entrance
supported each side on 2 engaged colonnettes with restored
moulded capitals. C17 double wooden gate with panels decorated
with strap and fret work and topped with small decorative iron
spikes. In each side wall is a single arched small light. Inner
C13 moulded arched doorway supported on engaged colonnettes and
moulded capitals with C17 door. To the left is a single similar
C14 window with hoodmould and human label stops. With single
similar restored C14 window in the west wall with hoodmould and
human head label stops. Clerestory corresponds to north.
Interior. 3 bay C13 nave arcades. Double chamfered arches
supported on quatrefoil piers and reponds with fillets which
extend into the moulded capitals. Wide circular bases. Tall
pointed arched uncut tower arch. Double chamfered chancel arch
supported on octagonal responds, with moulded capitals and
continuous imposts. Chancel/vestry 2 bay double chamfered arches
supported on single circular column and responds with moulded
capitals. Restored and blocked chamfered arched piscina with
broach stops in the south chancel. In the north chancel wall is
an aumbry with remains of a piscina. The south wall of the south
aisle has an arched piscina and the north wall of the north aisle
a small piscina. Evidence of former nave roof on tower wall.
Continuous sill band to south aisle. Early C14 octagonal font
supported on piers, each side of the font decorated with a single
crocketed gable with finial and supported on single carved human
and animal heads. C17 table in south aisle with large turned
legs, remaining furnishings C19. Set into the south chancel wall
is an early C16 incised slab of a priest. In the north wall is a
row of 4 C17 slate tablets to Charles Broughton, that on the left
decorated with a shield, the 2 tablets to the right with
inscriptions and that on the far right with damaged alabaster
skull and cross bones. The east wall has a monument to Petri
Broughton, 1694. This has an alabaster surround to the slate
tablet and is surmounted by a decorative shield. There is a
reclining cross legged effigy of Sir John de Lowdham, 1318, clad
in chain mail with head on a pillow supported by 2 angels and
feet on a dog. In the chancel is a C18 floor slab.