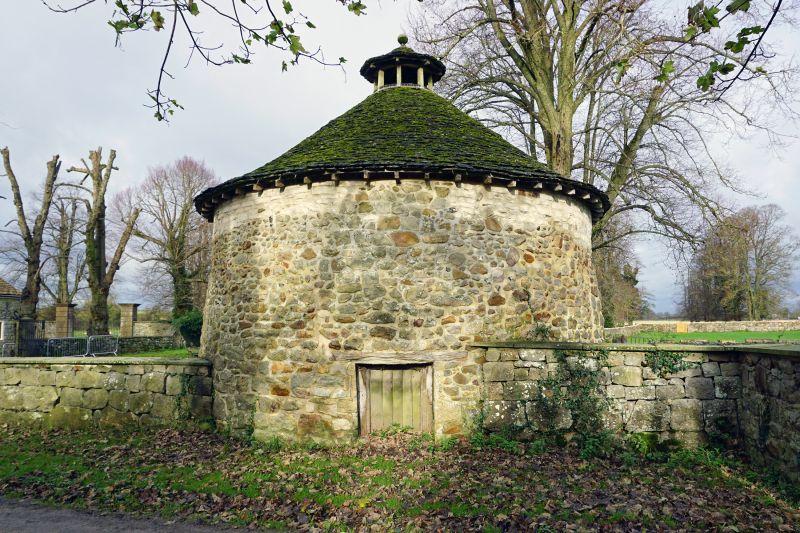 MATERIALS: it is constructed of local sarsen rubble, formerly rendered, under a conical stone-slate roof.

DESCRIPTION: the building is circular on plan, with slightly battered, roughly-coursed rubble stone walls with repairs in stone. It has a low, square-headed doorway to the south with a timber lintel and recessed plank door with strap hinges. On the north side is a cambered-arched doorway with brick surround, timber stable-type door and rectangular fanlight which is a later insertion. There are overhanging eaves and the roof is surmounted by an open cupola with its own stone-slate conical cap for pigeon entry. It is crowned by a ball finial. The interior has lime washed walls and is lined with some 15 ranks of nesting boxes without alighting ledges, and there is no ladder. The floor is laid with stone rubble.

Avebury Manor stands on the site of a Benedictine Priory. It was sold in 1411 to Fotheringhay College which held the lands until the Dissolution of the Monasteries, and in 1547 was granted to Sir William Sharington. In 1551 the house and estate were then sold to William Dunch, a wealthy businessman and Auditor to the Royal Mint. The house underwent various alterations and refurbishment over the centuries, and was extended in about 1750, 1850 and around 1907. The surrounding land was sold to the National Trust in 1943 by the then owner Alexander Keiller and in 1991 the Trust purchased the house.

Within a partly-walled enclosure to the east of the house is a stone-built dovecote which dates from the mid-C16. An article from 1917 (see SOURCES) which refers to late-C16 depositions considers that it was built sometime between 1533 and 1569. Dovecotes (or pigeon houses) are specialised structures designed for the breeding and keeping of doves as a source of food and as a symbol of high social status. Most surviving examples were built in the period between the C14 and the C17, although earlier and later examples are documented.

The dovecote at Avebury Manor which dates from the mid-C16 is listed at Grade II* for the following principal reasons:

* as a well-preserved example which retains its architectural character and the key distinguishing features of early dovecotes, including the original low entrance, cupola and serried ranks of internal nest boxes, which illustrate its original function.

* as an important reminder that pigeons were farmed in the post-medieval period.

* it benefits from a spatial and functional group value with the adjacent, Grade-I listed Avebury Manor, to which it provided highly-prized meat. It also groups well with the barn (Grade I), former stables (Grade II) and the abutting boundary wall (Grade II).