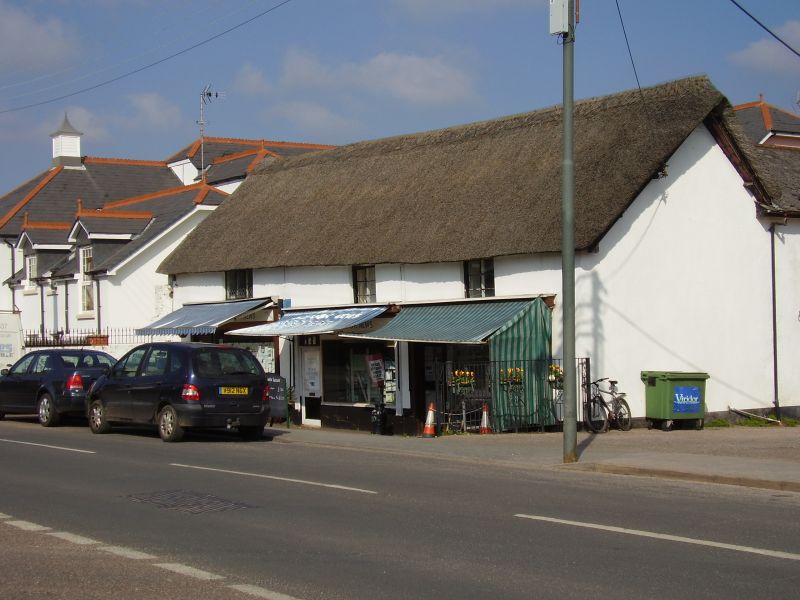 II
Row of shops; originally a house. C18 with later extensions and alterations. Converted to cottages, probably in the C19, and latterly shops in the mid-C20. The ground-floor, left-hand bay to the rear of No 36 and the flat-roofed C20 extension to Nos 32-34 are not of special interest.

MATERIALS: Painted and plastered cob walls with a thatched roof that is half-hipped at its north western end.

PLAN: The building is of five bays, and divided into two shop premises. There is a single-storey outshut and a flat-roofed C20 extension to the rear (north-east).

EXTERIOR: Of one-and-a-half-storeys. The main south-western front faces onto the roadside. The ground-floor has three mid-C20, modernised shop fronts that are flanked by pilasters. Above are two- and three-light timber casements with leaded panes to the latter. There is a sash window set high in the north-west gable wall.

INTERIOR: There have been internal alterations, but some features of interest survive. Although the part of the rear wall was removed when the flat-roofed extension was added to the rear, the exposed ceiling beams survive. These spine beams are deeply chamfered and have stepped stops. The upper floor and roof carpentry were not inspected (March 2010).

HISTORY: Lower Woolbrook, which now forms part of Sidmouth, was previously a small hamlet, and Nos 32-36 Woolbrook Road is among its oldest building. It was probably constructed in the early C18. It is depicted on the tithe map of 1840 as a rectangular building and described as 'house and garden'. By the late C19 the building had been converted into cottages, but was subsequently converted into shops in 1936.

REASON FOR DESIGNATION: Nos 32-36 Woolbrook Road is designated at Grade II for the following principal reasons:
* Architectural interest: an early-C18 vernacular building constructed from local materials in accordance with local custom and tradition
* Historic fabric: although shop fronts have been inserted, the original core of the building survives