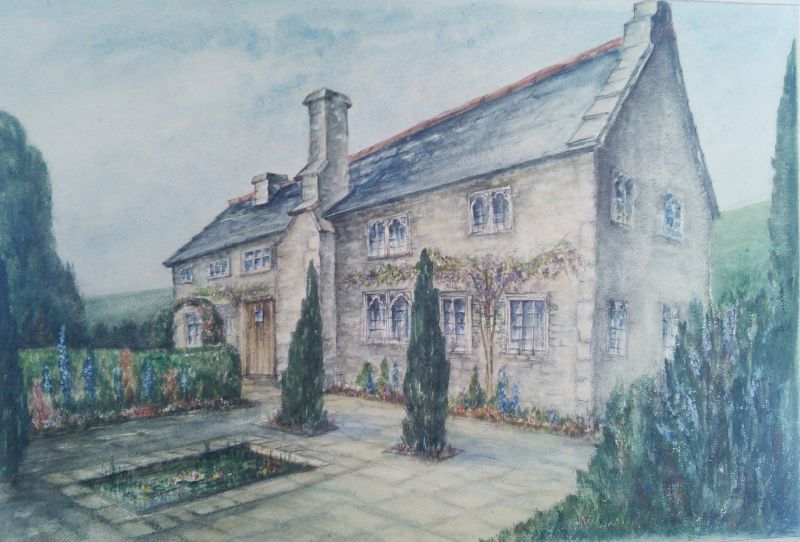 MANSTONE LANE
1.
1633
Manstone Old House
SY 1289 6/18 12.10.51.
II*
2.
2 storey Medieval house, rubble walls of mixed local stone, originally
of hall type. For many years a farmhouse but now restored as private
residence, the north west end no doubt extended at this time in similar
material with wood mullioned casements. Gable end new slate roof. The
south east gable end is original with saddlestone and at apex 2 very
weathered, low roughly octagonal shaped chimney pots which are very pos-
sibly Medieval as they relate to the solar at this end of the building.
The solar windows are the earliest, probably C15, small with 2 cusped
headed mullioned lights. Other windows later, stone mullioned with drip
moulds over. The present front entrance has been restored but to the
rear is a pointed arched doorway with corbel heads that might be older
than C15. The front of the house has an external stone chimney with off-
sets and a tablet with initials and date "HM 1389". It is very doubtful
that the date is contemporary, though the house might be of that date.
The tablet existed in this form nearly a 100 years ago. Possibly it
should be 1589 and the chimney would be more of that date. The most impor-
tant surviving internal feature is the solar on the 1st floor at the south
east end of the house. This has 3 arched braced-collar trusses support-
ing the roof with wind braces between purlins. The outer end wall retains
the frame of four-centred chimney piece, and above to the right, inserted
in wall, is an ornamental capital with head leaf decoration. The inner
end wall of room has tie beams and some of vertical intermediate timbers.
Low pointed solid door in solid wood surround. In the ground floor room
to right of entrance is another 4-centred chimney piece frame. The room
also has pm"tition wall and beamed ceiling. The former hall, now partitioned
off from staircase, also has similar chimney piece and restored settle
with linen fold panelling. The house is now unfortunately hemmed in by
a housing estate.