A Grade I Listed Building in Weaverham, Cheshire West and Chester 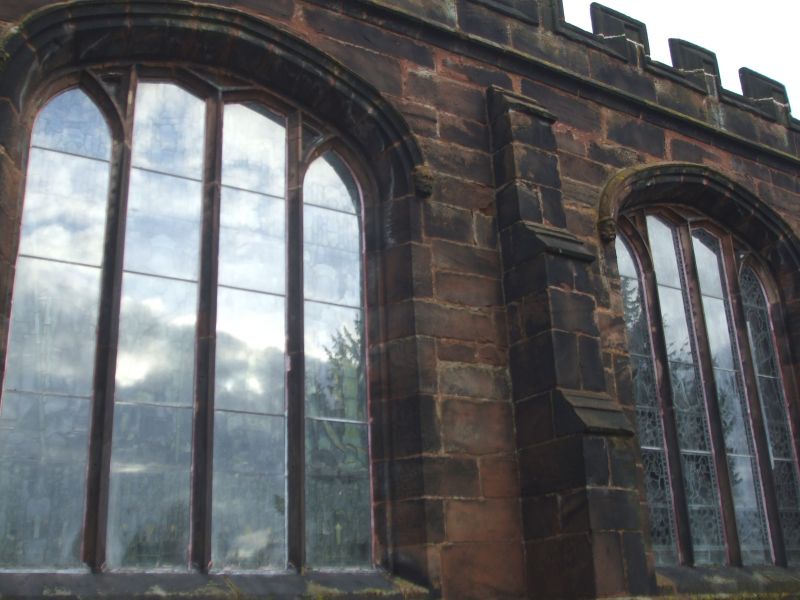 Church: Tower mid C15, remainder C16,probably later C16, restorations
of 1855 by Salvin, 1877 by Douglas when porch and vestry added.
Ashlar red sandstone, Welsh slat roof. 5-bay nave and chancel, and
aisles under roofs of parallel ridges and almost the same height,
south porch, vestry and 4-stage west tower. South aisle has a moulded
plinth, cill band and cornice, and an embattled parapet. The bays are
divided by buttresses. The gabled south porch at the left end has a
moulded 4-centred arched entrance on colonnettes with a label mould on
carved head stops. Figure of Christ and inscription in the gable.
Broad 4-centred arched 4-light aisle windows have minimal cavetto
moulded tracery. The chapel window is slightly smaller. The east
end, south aisle and nave windows are 5-light with uncusped panel
tracery. North aisle is similar but of 4-lights. The north aisle is
more barren than the south aisle and can be shown to have been added,
but has a priest's door. The bold tower has diagonal buttresses, and
bands at each floor. Band of cross motifs below parapet with
gargoyles and an embattled parapet. Sharply pointed arch to the west
door, restored 3-light west window and similar louvred bell openings
in the top stage. South side has the Warburton arms.

INTERIOR: continuous 5-bay arcades in nave and chancel with no
chancel arch. The arcades have octagonal piers with broad 4-centred
arches. To the nave, the north aisle piers are thinner and their
capitals differ from the chancel and the south aisle. Trusses in nave
are sprung from stone corbels and are arch-braced with 2 diagonal
struts. Roof contains 2 dormers of 3 semicircular headed lights.
South aisle has flat ceiling of moulded wooden cross beams (a C19
restoration). North aisle has a very low pitched panelled ceiling
with deeply moulded members. North aisle chapel screens have fielded
panels and a turned column balustrade above. The Wilbraham chapel in
the south aisle has a similar parclose screen and balustrade, but with
plank and moulded muntin panelling to the chapel screen. Fine
communion rail of 1709 of twisted balusters and reredos of reset
linenfold panelling brought from Dutton Old Hall. Good C18 brass
chandelier in chancel. Simple octagonal font on a plain column has
ornate Jacobean wooden cover of 8 brackets and a tall finial.

This is a very large and complete church of the Post-Reformation
period. The manor of Weaverham was held for 250 years by Vale Royal
Abbey and so the church must have been rebuilt after the Dissolution
by the new manorial owners.