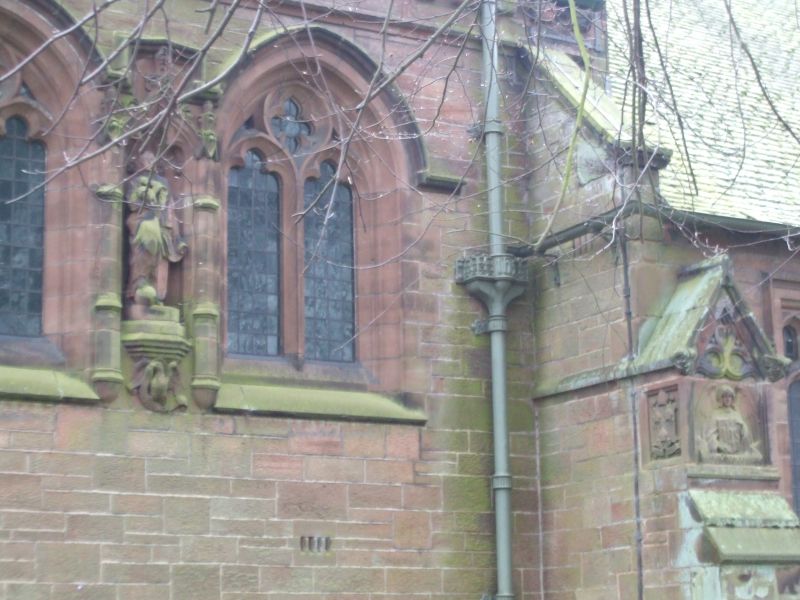 Church: dated 1902 by and partly at the expense of john Douglas.
Tower completed some years later as his memorial. Irregularly coursed
tooled red sandstone with ashlar dressings. Lakeland slate roof.
4-bay nave and taller 3-bay chancel, south porch, vestry and 3-stage
west tower. Perpendicular style nave. Decorated elements elsewhere.
Gabled porch has a carved inscription over a 4-centred arched door.
Nave has pairs of 2-light rectangular windows with panel tracery and a
continuous label mould. Between nave and chancel is a triangular
headed buttresses with an angel on the face. Chancel has a corbel
table and a mixture of simple 2 and 3-light 4-centred arched windows.
Figure of St John in niche. 5-light east window with flamboyant but
uncusped tracery. The north side has a slightly different pattern of
windows. Tower has diagonal buttresses and a plain 3-light west
window above which are 5 strip pilasters that rise to the top of the
tower, where they form cusped heads, the central pair being over
louvred bell openings. Embattled parapet. On the south side of the
tower is a door to a projecting stair turret which ends at the 2nd
stage.
Interior: The nave has a moulded cornice and the pairs of nave
windows are divided by a free standing octagonal pier. Arch-braced
collar trusses are carried on heavy corbels. Tower arch over an
octagonal font and a Della Robbia (Birkenhead) panel in the wall.
Chancel has an arcade of Perpendicular openings to the organ console
which carries a carved and figured organ case. Quaint 2-seat sedilia
and aumbry. Panelled roof with foliage bosses over the sanctuary.