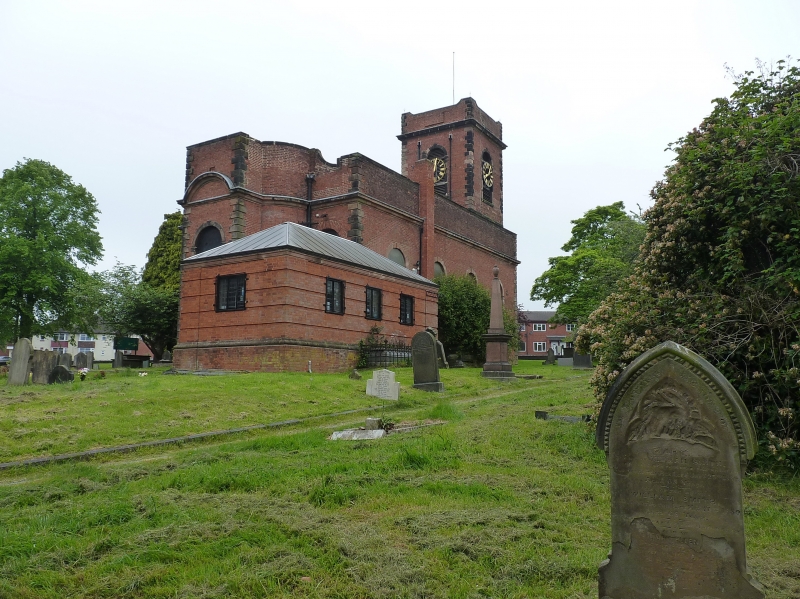 Church. Consecrated 1732, partly rebuilt in 1963. Brick in Flemish bond
with slate roof. Comprises a west tower, nave, narrow chancel, and north-
east vestry rebuilt in 1963. The four-bay nave has chamfered quoins, a
cornice which continues around the tower, and a brick parapet. The windows
have stone surrounds with round heads, keystones, and impost blocks. The
tower parapet, above a cornice, is swept upwards at the corners. The bell
openings are louvred and have surrounds similar to those of the nave windows.
Attached to each is an iron clock face. Below is a band, and below that a
blind round opening. The west doorway has an outer round brick arch and an
inner stone surround with round head. The chancel has a square east end,
and convex walls joining it to the nave. The east wall has a segmental
pediment above the cornice, and a window similar to those of the nave. To
each side of the chancel, in the east wall of the nave, there is a doorway
with a round window above, under a brick arch. The left-hand doorway is now
blocked, and the right-hand one is covered by the C20 vestry. Interior: west
gallery, added in 1759, has timber front carried on two fluted timber Doric
antae. Walls have dentilled cornice, with bays separated by a giant order.
The round chancel arch is flanked by pilasters. Wall tablets include one
on the north respond of the chancel arch to John Hinckley, died 1740, and one
on the south respond to Dorothy Parkes, died 1727. History: Dorothy Parkes of
Birmingham left money to build a chapel on her lands in Smethwick. It was
asigned a district in 1842 and has no dedication. (VCH, pp 123 & 124).