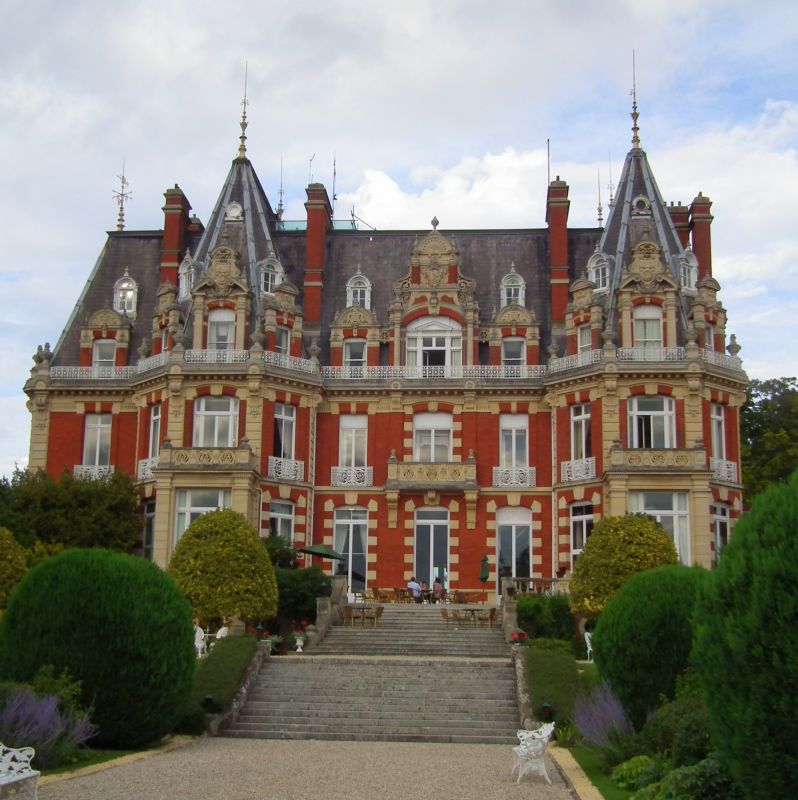 GV
II*
Country house, now hotel. 1869-1875 with late C20 alterations. By Auguste Tronquois of Paris, executed by Richard Phené Spiers, for John Corbett. Brick with ashlar dressings, mansard slate roof. French Renaissance style. Garden (south-west) front: two storeys on basement, two attic storeys, Symmetrical, with extra range of windows to left; ten windows arranged 1:3:3:3; the windows to left and right of main part in full-height 3-window angled bays, all windows 2-light plate glass French casements under segmental and rubbed brick heads with keystones, stone balconies to central window and to front of bays, ornate cast iron railings to others; central windows of bays are tripartite flanked by stone quoin pilasters; central window has rusticated effect to jambs produced by alternate bands of stone and brick. Ground floor windows as above, with the rusticated effect to all save the two central windows of the bays which have rusticated fluted pilasters; the five central windows open onto the terrace (qv); basement rusticated.
Attics: lower level has ten dormer windows all in surrounds bearing a profusion of classical detail used in a quasi-Gothic style; urns and cast iron railings to parapet balcony, date stones over central windows of all the angled bays; "1875"; upper level: seven windows with wooden surrounds, round heads; further shaped vents above into the roof space of the hipped cross-roofs.

Interior: mostly destroyed, but at south-east end (entrance front) a well staircase off hall with stained glass windows. An interesting example of a house erected by a self-made Victorian industrialist. The French Château style was short lived and rare outside
London. Original plans hang in the hotel.