A Grade I Listed Building in Earls Barton, North Northamptonshire 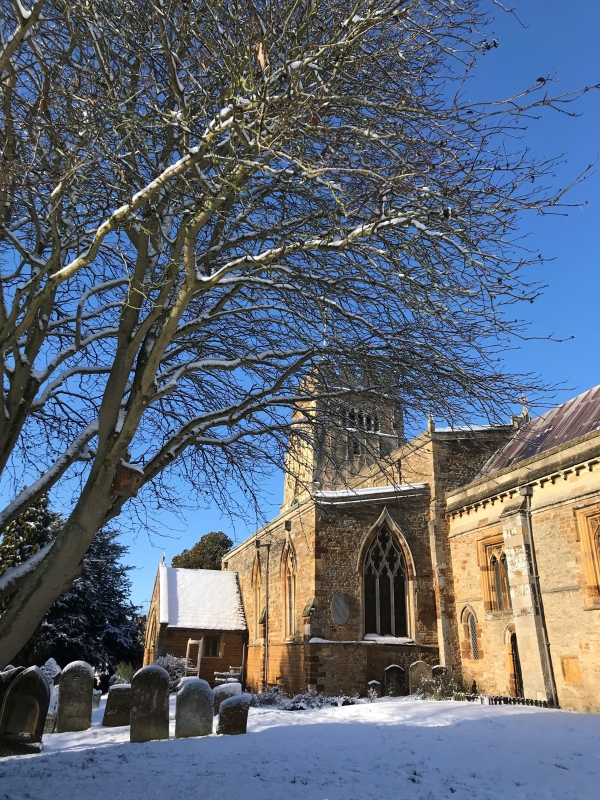 Church. Late C10, early and late C12, C13 and C14, restored mid C19. Coursed
rubble and squared coursed limestone and lias with ashlar dressings and lead
roof. Aisled nave, chancel, south porch and west tower. South elevation of
chancel of 3-window range of C14 two-light windows, 2 to left have square heads
and other has segmental head. C12 south door has round-arched head and low side
lancet to left. Steep gabled roof with ashlar parapets and finials. East window
is a C13 triple lancet with shafts between. North elevation of chancel has
central projecting vestry with 3-light north window under segmental arch head.
2-light square head window to right and single lancet to left. South aisle of
3-window range of 2-light Decorated windows with reticulated tracery and ogee
heads with uncarved finial blocks. Similar 2- and 3-light east and west windows.
Lean-to roof with ashlar parapet. Porch to left of centre, restored C19, has C14
double-chamfered outer arch with cluster responds. Late C12 inner door has 2
orders of shafts with 2 bands of zig-zag decoration round the arch with centre
bands of beak heads. North aisle of 3-window range of 2-light Decorated windows
with reticulated tracery. Similar 2- and 3-light east and west windows. Lean-to
roof with ashlar gable parapets. Nave clerestory of 4-window range of 2-light
square head windows with C19 tracery. Fine C10 west tower of 4 stages, each set
back, with long and short work at each corner. West door has capitals and abaci
decorated with balnk arcading and moulding around the arch. All faces of the
tower are decorated with lesenes which form a pattern of blank arcading to the
base of the second stage and intersect diagonally to form a band of diamond
shapes at the base of the third stage; the panels between are all rendered. Pair
of window openings to south of first stage have shallow arch heads with short
colonnettes and cross lights. Remains of similar openings to west face. Second
stage has door opening to south and third stage has single-light pointed-head
window openings to each face. Narrow five-light arch-head bell-chamber openings
to each face of fourth stage have colonnettes between. Several other minor
openings are probably C10. Castellated parapet is probably C14. Remains of
circular sundial or consecration stone to south face of first stage. Interior:
3-bay nave arcade of double-chamfered arches, those to the south are late C13
with octagonal piers and those to the north are early C14 with 4-shafted piers.
C13 triple-chamfered chancel arch has early C12 double-shafted responds. C13
double-chamfered tower arch has late C13 plain responds with many scalloped
capitals. Late C12 decoration around the top of the arch was probably reset.
Late C12 five and six-bay blank arcading with zig-zag decoration to north and
south walls of chancel. Similar triple stepped sedilia to south wall has been
altered. C14 recess to left. C19 roof structures. C17 carved panelled pulpit.
Perpendicular screen restored and repainted mid C19. C19 font. Monuments:
brasses to John Muscote died 1512 and his wife, wall mounted to south of tower
arch. 3 early C19 tablets with figures and urn above, to Whitworth family in
tower and to south of chancel. Other C19 tablets. Most nave and chancel windows
have C19 and early C20 stained glass. The tower is said to date from c.970 and
it is suggested that a narrow chancel may have been directly attached as the
long and short work is visible to ground level on the east face.
(Buildings of England: Northamptonshire, p.195).