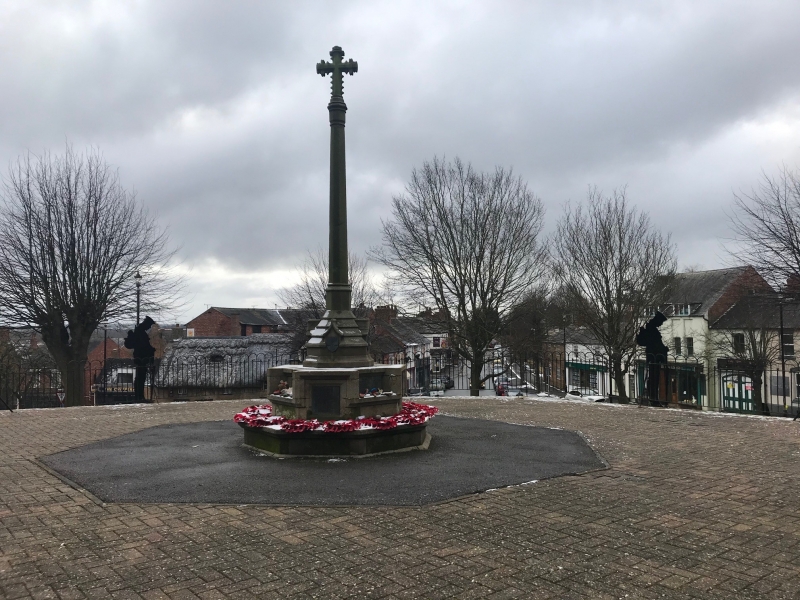 DESCRIPTION: the war memorial comprises an elaborate stone cross, with a foliate head inset with an inverted bronze sword set upon an octagonal shaft set with four bronze shields at its base. The shaft itself rises from an octagonal, multi-faceted, plinth. That stands on an octagonal base. Bronze tablets are set around the plinth. One carries the inscription THIS MEMORIAL HAS BEEN RAISED/ BY PUBLIC SUBSCRIPTION IN/ GRATEFUL MEMORY OF THOSE/ MEN OF THIS VILLAGE WHO/ FOUGHT AND FELL IN THE/ GREAT WAR FOR FREEDOM/ AND RIGHT 1914 – 1918/ + ‘THEY DIED THAT WE MIGHT LIVE/AND THESE STONES SHALL BE/ FOR A MEMORIAL FOR EVER’. Other tablets carry the names of the fallen, with a separate tablet recording the names of those who fell 1939-45.

The memorial stands within an original expansive, angled, railed enclosure. The modern brick paving within, and the asphalt around the memorial, is not of special interest and is excluded from the listing.

Pursuant to s1 (5) of the Planning (Listed Buildings and Conservation Areas) Act 1990 (‘the Act’) it is declared that the brick and asphalt surfacing around the memorial is not of special architectural or historic interest.

The aftermath of the First World War saw the biggest single wave of public commemoration ever with tens of thousands of memorials erected across England. One such memorial was raised at Earls Barton as a permanent testament to the sacrifice made by the members of the local community, who lost their lives in the First and Second World Wars.

Earls Barton War Memorial, on the green alongside All Saints’ church, is listed at Grade II for the following reasons:
* Historic interest: as an eloquent witness to the tragic impact of world events on the local community, and the sacrifice it made in the conflicts of the C20;
* Design: a well-executed, elaborate, stone cross;
* Group value: with the Grade I listed church of All Saints and other listed structures around The Square.