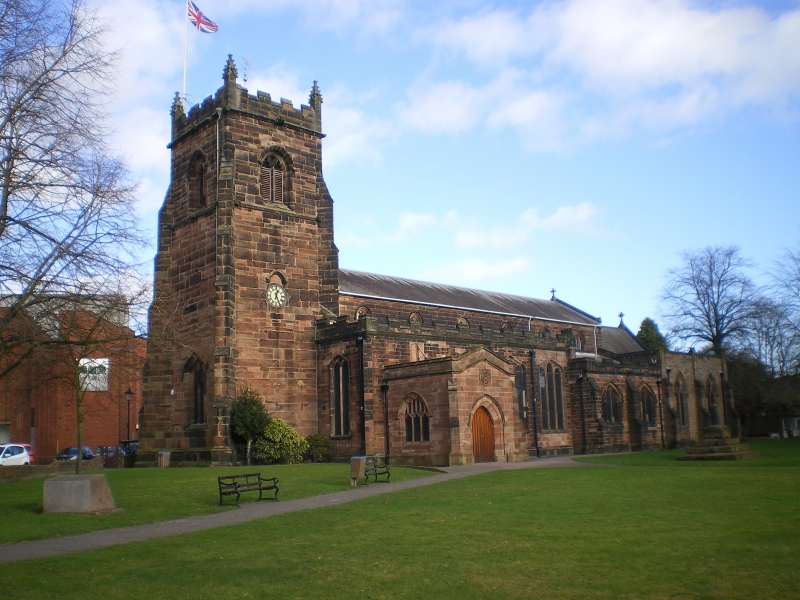 EXTERIOR: The church is mainly in Perpendicular style, and has an embattled parapet, with pinnacles on the north aisle. The 3-stage tower has diagonal buttresses and embattled parapet with corner pinnacles. Its 3-light west window has a triangular head. In the second stage is a blocked south window, probably C14, of which the label with head stops has survived, and where a clock has been added. The belfry has 2-light openings with louvres. The south aisle is 6 bays, with C20 porch in the first bay, then three 3-light windows, and two lower C19 projecting bays with 3-light windows. The north aisle is Decorated style, with three 3-light windows (the 2 east bays of 1878-82) and 3 bays set back at the west end with 2-light windows and a triangular window over a north doorway. This end of the aisle incorporates early fabric. The nave clerestorey has 2-light windows, blocked in the westernmost bay. The chancel has a 3-light geometrical east window, with sill band and hood mould. The lean-to vestry has an embattled parapet and 2-light north and east windows. The 2-bay south chapel has plain parapet, and 2-light Perpendicular windows.

INTERIOR: C14 nave arcades have octagonal piers with double ovolo-moulded arches (the 2 east bays added 1878-82). The tower arch has a similar moulding. The double-chamfered chancel arch is C19, with inner order on corbels. The nave roof has king-post trusses on corbelled brackets, and similar subsidiary trusses without brackets. Aisles have plastered or beamed ceilings. The 2-bay chancel roof has an arched-brace truss on foliage corbels (with skylight window inserted above the altar). Nave walls are plastered but other walls are exposed stonework. Stone paving and wood floors are late C20, with C19 red and black tiles in the tower base.

PRINCIPAL FIXTURES: The octagonal font is lead-lined and possibly medieval, but re-tooled in the C19 and on a later stem. The north-aisle vestry screen incorporates some C17 panels, but other furnishings are C19 or C20. The polygonal pulpit has blind Gothic panels. Above the linenfold-panel reredos are early C19 pointed brass Commandment plaques. The organ gallery is dated 1950. The seating is late C20, comprising choir stalls of 1983 and benches of 1987, the ends of which are engraved with names of donors. There are several wall tablets of the C17-C19, including a wall monument to Mary Warynge (d 1613) with Tuscan columns, entablature and achievement. The east window shows Christ in Glory (c1895) and there are 2 war-memorial south-aisle windows, one showing infantrymen receiving Holy Communion.

HISTORY: The church is of C12 origin, evidence for which is early fabric in the north aisle. It was enlarged in the C14 with nave arcades and tower. The tower and south aisle were altered in the mid C15. Restoration and extension of the east end 1878-82 was by Nicholas Joyce (fl. 1857-99), architect of Stafford. He lengthened the nave and aisles by 2 bays, built a new chancel and added a north vestry. There have been significant additions in the C20. A war-memorial chapel was built in 1949 (date on rainwater head) and a porch was built in 1957, replacing an earlier classical structure.

REASONS FOR DESIGNATION: The church of St Luke, Cannock, is listed Grade II* for the following principal reasons:
* For the extent and quality of its medieval fabric, comprising C14 nave, aisles and tower.
* It was well restored and extended in the late C19.
* For group value with other listed items in the churchyard, making a strong contribution to the historic townscape.