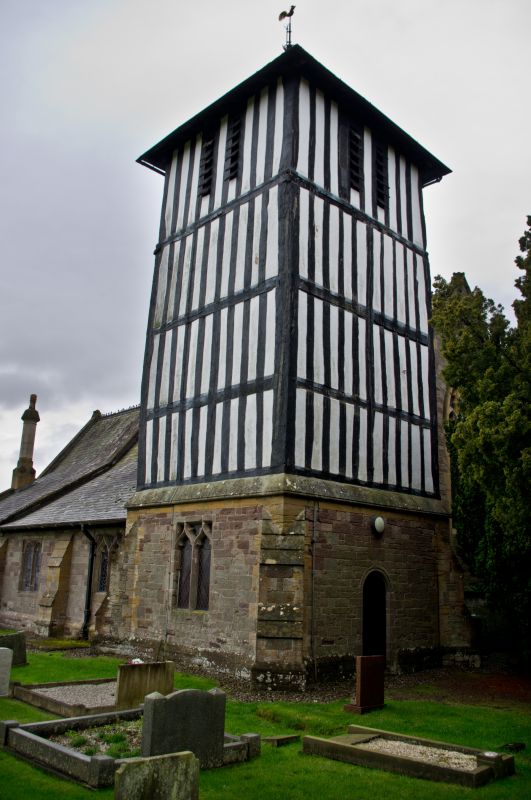 Parish church. 1877 - 80 by ? Cheiake on new site incorporating a number
of old pieces from the demolished church. Coursed and squared sandstone
rubble with ashlar dressings; Welsh slate roof. North-west tower, nave
with north aisle and south porch, chancel and north vestry. North-west
tower: four stages with pyramidal roof, sandstone rubble to lower stage,
close-studded timber-framing to upper sections, re-using old timbers.
Re-set in stone north wall is a 2-light window in square head with two
trefoiled-ogee headed lights; pair of louvred vents to each side of bell
stage. Nave: C19 windows to south wall with single-light window with trefoil-
headed lights and quatrefoils and trefoils in roundels to right of timber-framed
south porch with C19 square-headed doorway. Two re-set windows to north aisle,
one late C14 window of two trefoiled-ogee headed lights in square head. Eastern
C15 window of two cinquefoiled lights in a square head. Chancel: C19 windows,
two 2-light windows to south and 3-light window with flowing tracery to east.
The vestry contains a re-set early C14 window in the east wall of two trefoil-
headed lights and a square-headed window of two cinquefoil headed lights in
the north wall. Interior: re-set in the south wall of the tower is a doorway
of c1150 with square jambs and lintel and semi-circular tympanum with a carving
of Samson opening the jaws of the lion; on south wall of nave: incised slab to
Richard Grevelhay and his wife, 1473, in contemporary civil dress under a canopy.
Font: C13, round bowl with round stem and chamfered base. Fragment of C15 screen
incorporated into C19 screen in vestry. (RCHM, Vol II, p 176; BoE, p 295).