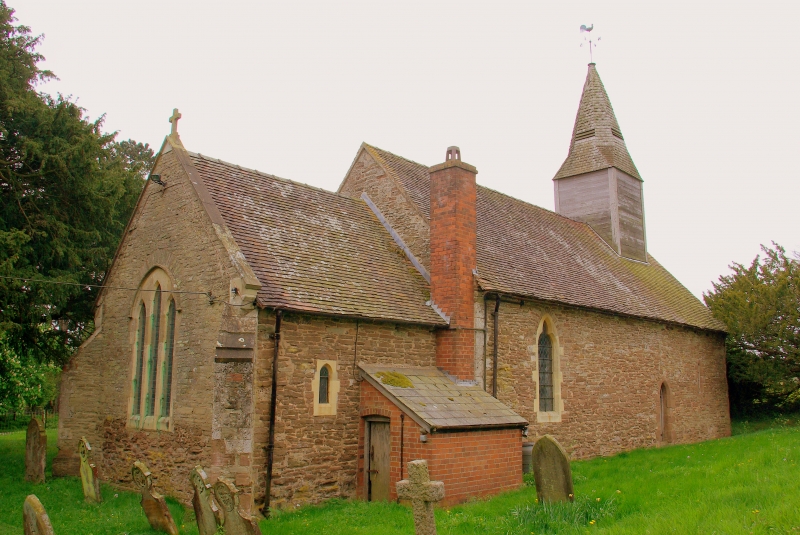 Parish church. C12, altered C13, restored 1866, with further alterations
in 1904. Sandstone rubble and tufa with sandstone ashlar dressings, plain
tiled roofs with parapet at east end and shingled timber bell-turret.
Nave with opposing doorways, south porch and bell-turret, and chancel.
Norman and Early English styles. Nave: C12, extended westwards in C13;
buttress with offsets at south-east end; C19 cusped lancet in west gable
end; north elevation has a similar lancet at its eastern end, a small C13
lancet at its western end and between them is a narrow C13 doorway; the
window arrangement of the south elevation is the same and it has two late
C18 wall memorials to the Nash and Spilsbury families, an early C19 memorial
to the Price family, a mid-C19 and another illegible memorial. South porch:
1904; gabled and timber-framed on chamfered sandstone ashlar base; moulded
bargeboards and pendant finial, brattished tie-beam and double doors with a
cambered head and side lights; side elevations have three panels of leaded
glass; C13 doorway is of one chamfered order and above is a C12 panel carved
with an Agnus Dei, probably removed from the original doorway. The bell-turret
has a square base with square stone sundial, an octagonal splay-footed spire
and cast iron weathervane. Chancel: C12; east end rebuilt C19 with diagonal
corner buttresses, 3-light window and hood mould.with returns; north elevation
has a C12 light and, to the west of it, a C19 brick lean-to addition with an
east doorway at tall brick stack; south elevation has a C13 doorway.
Interior: plastered throughout; plain semi-circular C12 chancel arch which
springs from plain abaci the west faces of which are cut away possibly for
a chancel screen; above the arch on the east side is a niche. In the south
nave wall the former south doorway has been blocked to form a round-headed
recess. Nave and chancel have ashlared arch-braced collar rafter roofs;
two large lateral beams support the frame of the bell-turret. C19 aumbry
in chancel. Late C16 panels and turned posts incorporated in priest's and
bishop's chair and lectern. C12 circular font with C19 stem. C19 pulpit
with three concave sides carved in one piece with diaper panels. Memorials:
chancel has a large sarcophagus relief by J Stephens to James Wakeman Newport
Charlett, died 1838; also two early C18 memorials to the Newport family and
a small late C18 memorial; early C19 memorial at south-east end of nave.
Glass: east window probably by Hardman. (VCH 4, p 278; BoE, p 189).